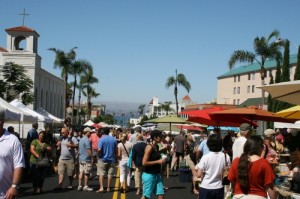 Now that it’s football season I spend most of my Sunday’s watching the NFL RedZone channel on the couch.  But once I get tired of that in a couple months I’ll probably go back to my normal routine of waking up early and strolling down to the local farmer’s market.

I’m not sure what’s so attractive about farmer’s markets but I love going just to check out all the cool vendors, sample food and of course I usually end up buying a ton of stuff.  Farmer’s markets in my area have evolved from selling just groceries to all different types of products like cheeses, butter, nuts and even restaurants are getting in on the action now.

I usually go for the food and produce though, everything is super delicious and a lot of it is either locally grown, organic or pesticide free.  Almost all of it looks and sounds tasty and healthy but at the end of a 1 hour shopping trip I’ve usually spent at least $50 on one or two bags of groceries.  I like supporting local businesses and buying healthy fruits and veggies but at a certain point you have to wonder is it worth it to buy a tomato that’s four times the price of a regular non-organic tomato?

I’ve never been the type to obsess over whether veggies are organic or not and anyone who tells me they can taste the difference between an organic and non-organic fruit is full of it.  I’m no scientist either though so I have no idea just how bad pesticides and things like that are on fruits.  But I do know that just like with everything else in life, as long as you consume these products in moderation you’ll probably be just fine(I learned just the other day that there are actually acceptable levels of radiation that can be present in our bodies).

It seems like I’m faced with dilemmas like this all the time since it’s usually more expensive to ‘Go Green’ as they say.  Here are some of the most recent encounters I’ve had and whether I thought it was worth it or not to spend the extra money to save the planet.

Since I’ve had more free time lately, I’ve been helping out one of my family members remodel their house.  One of the things that I spent a lot of time researching was solar roof tiles.  Solar technology has evolved a lot in the past ten years and the cost has come down enough to make buying them cost-effective.  There are obviously some ancillary benefits too since harnessing solar power allows you to produce less carbon.

I’m all for saving the earth but I also want to save some money too.  In this case, it made sense to go with the solar tiles since there was a financial incentive too.  My uncle plans on being in the house for the rest of his life so the 6 year break even point seemed reasonable.  For most people, that might not be the case though, especially considering the average length of home ownership is only 7 years.

I think it’s more important to eat a healthy and balanced diet than it is to worry about organic vs. non-organic.  If you only eat organic fruit and veggies but then go and stuff your face full of McDonald’s two nights a week I think that probably negates any savings you might have gotten from buying organic.

I’ve always made an effort to recycle because everyone told me it was good for the environment.  But at my last job, I heard a story that even though they had recycle bins and regular trash bins, they would just merge the two when the trash man came.  I thought this was kind of funny actually since I’ve also heard that sometimes in order to recycle paper and things like that with a lot of colored ink on it, they have to use chemicals that are pretty harmful to the environment.

Either way, I usually make a point of recylcing because it’s just so easy to do.  I mean how hard is it to put paper and plastic in one container and trash in the other?  We actually have it easy here in the US compared to other countries.  When I visited Japan two years ago, I was amazed to discover the Japanese government actually had multiple trash days for all different types of trash.  In Japan, you even have to split up your recycling by color(clear plastic vs. colored), glass vs. plastic, etc. and you couldn’t even recycle caps and bottles on the same day haha!  That would never fly in America.

Readers, so what do you think of ‘going green’?  When is it worth it and when is it not?  I’m sure there will be some good opinions on whether or not it’s worth it to buy organic so let’s hear ’em!