Editor’s Note: This is our second to last guest post which unfortunately means that our honeymoon is coming to an end.  We had to fly home through Istanbul anyways so I figured why not use up one of my free Hyatt suite nights and stay in one of my favorite cities for 24 hours?  Nothing like a fresh fish sandwich straight out of the Bosphorus river and a half and half fresh squeezed orange/pomegranate juice to wash it down.

Today, I’m featuring a post from my friend Liquid at Freedom Thirty Five Blog.  We actually go way back since he was one of the first people I started chatting with about blogging back when I just started almost three years ago.  I hope you enjoy the post and let us know what you think in the comments section.

Many of you are probably familiar with Maslow’s hierarchy of needs. It represents people’s needs in a hierarchical structure like a pyramid. It proposes that higher levels of needs, which are less important, cannot be sought out until the lower fundamental ones have been met. At the very bottom of the of this pyramid are essential needs for survival such as food, water, and sleep. Once those needs are met the next level up covers safety and security. A similar framework can be applied to finances, in a hierarchy of wealth. There are only three levels in this hierarchy. 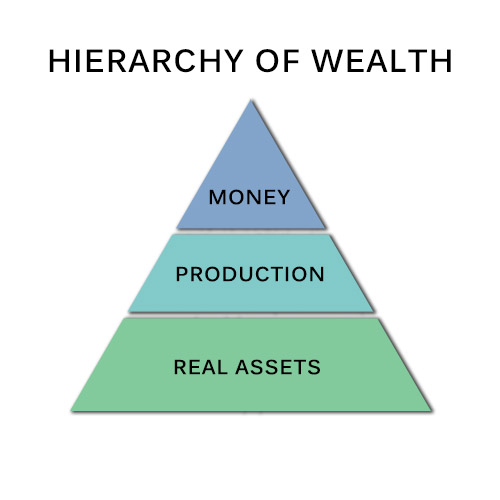 The bottom level of the wealth pyramid contains real assets. These are sometimes known as “hard assets” and include commodities and other resources found in nature that have intrinsic value, which means they can be useful in and of themselves. Wealth at this level can include land, trees, tobacco, oil, gas, clay, copper, silver, water, and other natural resources. Without this base layer of fundamental wealth there would be no commerce, no investments, and no economy in the world at all. All the monetary wealth we have today is a result, either directly or indirectly, of real assets.

The next level up the pyramid is the production of goods and services, or adding value to raw resources. This layer of wealth takes the real assets in the previous level and enhances their utility by unlocking potential. For example, if you make pottery from clay, or roll cigarettes from tobacco, then you can sell your product at a higher price than the original base material cost because you’ve added value to it. Types of wealth in this category can include manufacturing plants, office buildings, farms, medicine, clothing, restaurants, and all kinds of businesses including publicly traded companies.

Once the conditions for the lower 2 layers have been met the last part of the pyramid at the top is a universal currency, or the medium of exchange commonly referred to as “money.” This type of wealth exists to easier facilitate financial transactions and commerce. Instead of bartering or trading valuable goods, people can store wealth in the form of currency when they sell their work or product, and then unlock that value later when they spend their savings on something that they want. In today’s world, the type of money we all use happens to be fiat currency. This means the value of the currency is not tied directly to the value of a real asset. This gives governments around the world the ability to create money and increase the money supply in an economy, or destroy currency and decrease the money supply. Government intervention via monetary policy can create a more stable economy but this also means the value of the currency only comes from the people’s confidence in the economy itself, and their belief that the government is financially responsible and solvent.

All the riches in the world today, including paper money, are derived from real assets in one way or another because real assets are the foundation layer of the wealth pyramid. The second layer of wealth is also important because it maximizes the value of the resources and raw materials we have. And the third layer, currency, helps make every day life more convenient. Having a million dollars sitting in a savings account doesn’t necessarily make you rich. To be truly diversified in wealth it’s important to accumulate all three forms of riches. Having a diversified hierarchy of wealth can protect you against inflation and other financial uncertainties. So a balanced investment portfolio may include some hard assets like real estate or property, some value added businesses like blue chip stocks or profitable private companies, and some currencies, such as the US dollar, the Euro, T-Bills, a bond ladder, or a money market fund, for liquidity purposes.

Author Bio: Liquid is the blogger behind Freedom 35 Blog. His goal is to become financially independent by age 35 through unconventional means like borrowing money from the bank to invest in the stock market, and buying alternative assets like mortgage backed securities, farmland, and precious metals. In 2013 he made $40,000 from his investments alone, and this year he is on track to double that amount.