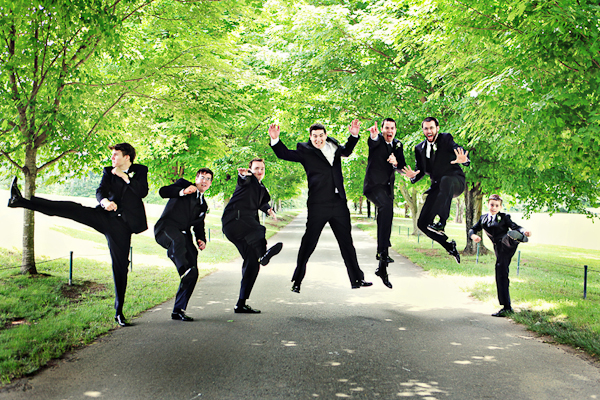 A lot of the wedding related articles I read have to do with how the bride and groom can save money on this or that but not many of them talk about how much it’s going to cost other people. I’ve been a groomsmen for one wedding and I’ll be having 7 groomsmen at my wedding so I’ve been thinking a lot about the cost of being a groomsman. The first thing all of my groomsmen actually asked me though, was “Do I need to do anything?” And the truth is, it’s really not that much work to be a groomsman. All you really have to do is just show up.

My brother(best man) will be planning the bachelor party so there isn’t much work to be done on the planning side. But one thing they’re probably starting to realize is that the cost of being a groomsman can really start to add up. We all know about the major items like bachelor party and renting a tux but there are also things like hotel rooms, presents and even haircuts that they’ll have to worry about. You don’t want a bunch of scruffy looking dudes to ruin your beautiful wedding pictures.

I’m listing the bachelor party first because this is where most of the financial damage will be done. If you’re on a budget, then you can probably have a pretty fun day or two in town but even that isn’t going to be cheap. Most bachelor parties involve dinner, drinks at the bar, entertainment and some type of activity at a minimum. All that will probably run you at least $250.

If you decide to make it a weekend trip, you’ll need to double the cost and add the price of a flight. Since most of my friends are near Los Angeles, I decided to hold my bachelor party in San Francisco. I’m pretty excited for SF because it’s a great city for all sorts of bachelor party-related activities, plus it’s close and convenient for everyone to get to. The cost will probably be in the $500-$750 range per person after it’s all said and done.

I’ve heard that some grooms will actually cover the cost of rental tuxedos for all their groomsmen but that isn’t as common these days. Planning a wedding is pretty damn expensive so I don’t think it’s too much to ask a groomsman to cover a $150 suit. A lot of times the tailor shops will actually give you the option of buying the suit so it might be a good idea to look for some discounted suits at a tailor shop or a Men’s Wearhouse type place so that at least your groomsmen would get to keep their suits. The only item I bought was a nice pair of shoes when I was a groomsman and I’ll probably use the same ones when I get married.

There are lots of other ancillary costs that are associated with being a groomsman and a guest in general at a wedding. Here are some things to consider:

Ways to Reduce the Cost

Most couples love to have tons of events leading up to the big day: including engagement parties, wedding showers, rehearsal dinners, etc. And at each one of these events, it’s customary to bring a gift for the couple. But it might be a good idea to tell your groomsmen they don’t have to do that since their gift to you was showing up to your bachelor party for example. Most people spend about $50 on a wedding gift(or more) so that can really add up if you have to get multiple gifts.

Another cool idea that I’ve seen in the past is to let the groomsmen dress more casually. Let’s be honest, nobody really wears tuxedoes anymore and you can look pretty sharp in a nice pair of khakis, button up shirt and a jacket. These items are less money than renting a suit and your groomsmen will get to keep them after the wedding.

Finally, it’s always an economical idea to give your groomsmen gifts that can be used in the wedding. For example, in the last wedding I was in, the groom gave out really nice orange ties to all of us to wear along with our suits. I’m sure those ties weren’t cheap either so it saved us a few bucks and I actually liked the tie so much I still wear it to other weddings!

Readers, so there you have it. What do you think about the costs of being a groomsmen? Would you ask someone to be your groomsmen if you knew that attending the bachelor party or even the wedding would take a big chunk out of their finances?