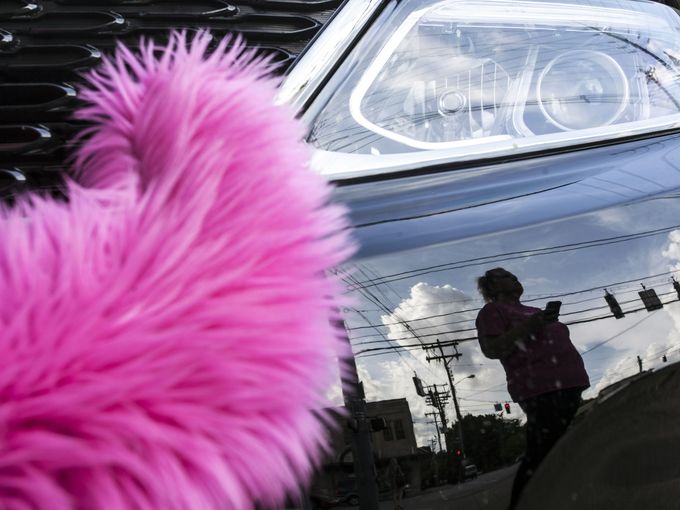 This post originally appeared on The Rideshare Guy Blog and Podcast but since I was busy celebrating the Fourth of July yesterday I didn’t have time to write a new post.  A lot of people have been asking me about my experience driving for Lyft and so far it’s been great.  And since I’m having such a good time driving, I actually decided to sign up for Uber too (the $500 didn’t hurt either).  Here’s how my first weekend went driving for both companies and a little story about how I didn’t even recognize my first celebrity passenger!

As most of you know I recently signed up for Uber in order to take advantage of their ‘$500 Steal A Lyft Driver’ promotion (Ok I made up that name).  Even though I started out with Lyft and I’m a bigger fan of their service in general it makes a lot of financial and business sense to drive for more than one TNC.  We don’t know what’s in store for one company over another so it’s essential that you diversify your streams of income as a small business owner (remember we are all business owners now).

Once I was signed up and ready to go, I decided to do some Uber-ing.  Up until this point, I’d only driven for Lyft so I was curious to see what it would be like to drive for both companies.

So here’s how my first week went driving for Lyft AND Uber:

Friday night I dropped off my fiancee at John Wayne Airport in Santa Ana and I decided to do a little driving.  I turned on both apps and hung out in the drop-off area for a while but got no calls.  I was kind of surprised that the police officers let me sit there for so long without saying anything to me but eventually I left on my own accord.  Since there’s a lot of turmoil going on with airport pick-ups right now I made sure that I took my Uber phone off the windshield (this is kind of a dead giveaway) and obviously didn’t have my bright pink Lyft mustache on the grill.

I circled around the block just outside the airport and I noticed that there were about 5 drivers waiting on my Lyft and Uber screen.  I hung out for a couple minutes but then decided to do one more loop through the airport before moving on.  As soon as I turned into the airport, I had my first call on Uber.

In my first podcast I explained how the Lyft passenger request system works and it appears that the Uber algorithm is slightly different.  There were 3-5 drivers waiting just outside the airport who had definitely been in the area longer than me (I check Uber using the passenger app) but I think I got the call since I was closer.

The passengers were a couple who had just gotten back from Cabo San Lucas and they were heading about 20 miles to Huntington Beach.  I’m trying out Waze right now and of course the app wasn’t working right the first time I tried to use it.  It was a little embarrassing but I explained to my passengers what was going on and they actually offered to open their Waze app but I decided to just go with Google Maps.  Since it was a Friday afternoon, there was a ton of traffic and Waze probably would have really helped.  I lost about 10-20 minutes due to traffic but we had an awesome conversation about Italy and Greece since they honeymooned there 10 years ago and that’s also where my fiancee and I will be heading this summer for our honeymoon.

The ride ended up taking about 45 minutes and I made $33 (gotta love those long rides).  It was kind of a bummer though since I had made a really good connection with this couple and they wanted to tip me but on Uber there’s no option for tipping and they didn’t have any cash.  In the future, I’ll consider bringing my Square reader along for Uber rides and that way I can let people tip via credit card if they want to.

I ended up getting 5 more calls over the next couple hours as I slowly made my way back home, all of them were on Uber.  As soon as my rides ended, I turned on Lyft but every single time I got an Uber request first.  Based off what I’ve seen so far, Lyft definitely pays more here in OC (due to to their 0% commission) but there are way more calls with Uber.

OC to LA With Rideshare?

I had to drive up to LA on Saturday so this would have been the perfect time to use Sidecar to slowly make my way up there but alas it isn’t yet active in the OC!  I ended up turning on Lyft and Uber while I waited at my house and the first call I got was Uber around 6 pm.  I ended up taking two couples to a nice restaurant in Laguna Beach and it turned out that one of the wives was a doctor at the hospital that my fiancee will be working at in a couple years.  She made me tell her my fiancee’s name over and over so that she would remember her – that was really cool of her.  And on top of that, I mentioned where I went to college and the guy’s cousin played volleyball there a couple years before me.  I never played with him but I knew who he was and see him all the time at alumni events.

One of the coolest parts I’ve found about being a rideshare driver is all the little connections you make.  Even if you’re in the car for just a few minutes with someone, it’s really neat to learn about their lives, find friends in common and share a unique experience.  I’m not driving because I’m lonely but I do find it very interesting to meet new people and talk about what’s going on in their lives and mine.  The ride ended up being around $30 and I got a $5 tip but I was headed in the opposite direction of LA.

I turned off the app for a while and headed towards LA and did a few more Uber rides once I got out of the OC.  For whatever reason, I just wasn’t getting any Lyft calls but the Uber calls kept rolling in.  It even hit Prime Time for a while on Lyft in LA but I didn’t get any calls.  Right around LAX, I had my last ride of the night and I took a guy from the airport all the way to Beverly Hills.

He was just a normal looking guy but I started talking to him and it turns out he was a singer in the band Macklemore and Ryan Lewis.  Obviously, I knew who they were so we started chatting all about that and he told me he was in town from Seattle to record an album.  I hadn’t heard of him before but when I got home I checked out his website and listened to some of his music.

This was my first rideshare encounter with a semi-celebrity and I think it’s pretty cool that such a wide variety of people take Lyft and Uber.  He looked just like any other passenger and if he wouldn’t have told me who he was, I would have never known.

I had a few errands to run on Sunday so I started driving in the afternoon.  For whatever reason, LA always seems to be poppin’ on Sundays.  I’ve driven there on two separate occasions and gotten a ton of rides both times.  I started around 4 pm and it was Primetime on Lyft (25%) so I waited until I got a call and did a couple short rides here and there.  I didn’t make a ton on Sunday since a lot of the rides were pretty short but I got a decent amount of Uber and Lyft calls (50/50) in just a few hours.

I’m still figuring out the best strategies for driving efficiently with both apps on at the same time.  I know some people prefer one over the other but I’ve found that UberX and Lyft passengers are very similar.  A lot of them use both services and just take whatever is more convenient or cheaper at the time.  My next article in this series will talk about the current pricing for Uber and Lyft and how to figure out whether you should drive for Lyft, Uber or do both at the same time.

Readers, what do you think about my first weekend driving for Lyft and Uber?  Have you noticed that there are more Uber or Lyft calls when you have both apps on at the same time?

Earn up to $35/hr driving for Lyft. Sign up here using my referral code.