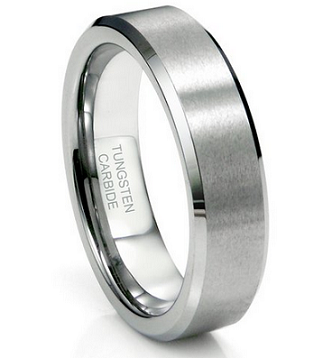 Weddings are a lot of fun.  And since I’m right around the age where a lot of my friends are getting married (including myself), I’ve been going to a lot lately and been having a pretty great time.  But I also know just how much work and how much money goes into each one.  And as a self-proclaimed cheap SOB, weddings and I don’t get along particularly well in the finance department.  Amongst all that spending though, I was able to score a huge win during my own wedding planning and no one seemed to be any wiser

For me, the thing I was most worried about when picking out a wedding band was finding something that I liked and looked nice.  I could care less if it was made out of white gold or platinum or tungsten or whatever.  Just because some guy in a suit tells me that a metal is supposedly ‘rare’ doesn’t justify me spending an exorbitant amount.

I will never understand why people pay so much for brand names when the actual product is nearly the same.  I have a fake Lacoste shirt that my wife got for me from the Phillipines for $4.  Whenever I wear it, I almost always get compliments and people tell me how nice it is.  I’m quick to point out though that it’s fake and there’s no way I’d ever be dumb enough to pay $80 for a shirt that costs less than $4 to make.  I apply the same theory to wedding bands.

It only took me a couple trips to the jewelry store to get an idea of the type of ring I wanted.  I couldn’t tell the difference between the rare metals (gold, silver, platinum) and the non-rare metals (tungsten, titanium, etc) so it obviously made sense to go with the cheaper ones.  The ring I ended up liking the most was about $300 in the store but I had a hunch I could find it cheaper online.

Within a few minutes of searching, I was able to find a nearly identical ring (same material, style, etc) for $20 (the price has actually gone down to $9 since I purchased it!).  The ring arrived within a couple days, it was high quality, looked great and it only cost $20!  Since then, I’ve received numerous compliments and also talked to numerous friends who have spent 10-20x more on similar non-rare metal rings.  What were they thinking?

What Will Other People Think?

My wife was pretty cool about letting me pick out my own band but I have a friend going through the process right now and the bride’s parents don’t want him to ‘cheap out’ on a wedding band.  I actually suggested that he just buy it off Amazon for $9 and tell everyone it cost $300.

One of the reasons why I think it’s a gigantic waste of money to buy material products like high-end jewelry and clothing is because most of the inherent value is associated with the brand name or style instead of the actual product.  If tungsten was all of a sudden a rare metal and the cost of my ring skyrocketed to $1,000 does that mean my ring is now worth $1,000?  No way!

Just because someone is dumb enough to pay $1,000 for a $9 ring doesn’t mean it’s worth $1,000.  I’d rather save my money to pay for something that actually matters.  And yes I did buy my wife a nice diamond engagement ring but we’ll talk about that one in a future article.

Readers, what do you think about my $20 wedding band?  Do you think it’s dumb to pay for a name brand or pay extra for a metal that some jeweler tells you is rare?