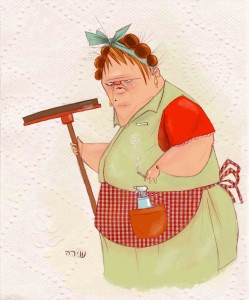 Now that I’m back working my day job, I have a lot less free time in my life.  I generally work online for 2-3 hours a night after work and that severely cuts into my TV watching and forces me to be a lot more efficient when it comes to managing my time.  So the last thing I want to do at the end of the night is spend my time scrubbing toilets or vacuuming my apartment.  It’s a tough predicament for me since I do like a clean house but I don’t like cleaning all that much.  I’m not a neat freak by any means but there are rarely dishes in my sink and even though I refuse to make my bed(since I’m going to get right back in it in 17 hours) I keep a pretty tidy household.

I guess you could say I’m good at the routine maintenance type cleaning, the every day stuff.  But when it comes to a deep cleaning, I absolutely dread having to do that.  I’d much rather pay someone else to do it for me.  I could never really justify a cleaning lady in the past since I had plenty of time to do it myself but now that I’m working two jobs, I felt like I was ready to pay someone to clean my house.

I’ve tried out a couple cleaning services in the past that I found through Groupon and Yelp but I was never that happy with the results.  With the first company, everything looked nice and clean when they were done but it didn’t smell all that fresh.  I used a different company the second time around and while they did a great job, their price seemed a little steep.  Now that I’m in Orange County though, I needed to find someone new so I turned to Yelp.

I read through a few companies and ended up narrowing it down to two services.  They both had stellar reviews and they were only two dollar signs($$) on Yelp’s pricing chart.  I figured that was a good indication that they would be cheap but not too cheap.  When I called them though, they both quoted me at $30/hr and estimated that it would take four hours to clean my place.

I was going to have to pay $120 for four hours worth of cleaning(plus tip), they were going to charge me $30 an hour!  That might not seem like a lot to some people but for a majority of you out there, this number should seem pretty outrageous.  $30 an hour is more than the average college graduate will make!

I was so appalled by the first two quotes I stopped my cleaning lady search right there.  I’m sure that both of these businesses do a great job and there’s a reason why they were both rated 5 stars with hundreds of reviews but I was pretty surprised that that many people were too lazy to clean their own houses.  In fact, I bet a lot of them probably should be cleaning their own houses instead of paying someone else $120.

I’ve always been a do it yourselfer so there are very few things that I will pay to have done without at least trying to do first.  But when it comes to cleaning, anyone can do it and anyone can do a great job.  It shouldn’t be that hard to find someone willing to clean for a reasonable price.  Cleaning supplies aren’t very expensive and they’ll last you for years if you use them sparingly.  I would understand if someone wanted to pay a vendor to fix their refrigerator or something of that nature(personally I’d try and do it myself first and then call someone if I fail) but I don’t get why so many people are paying so much for cleaning ladies.

The Real Cost of Housekeeping

I think a lot of people forget that they’re paying for these services with after-tax dollars.  It’s easy to say I make $30/hr so it’s ok to pay $30/hr to a cleaning lady since that’s basically a wash.  But really if you were to do the cleaning yourself, not only would you be saving that $30/hr but you wouldn’t have to work and make $40-$60/hr before taxes.  You can’t make this comparison with every type of service since most people don’t know how to fix a washing machine.  But over 99% of people on this planet have the ability to clean, whether they know it or not.

When Does it Make Sense?

It probably makes sense to hire a cleaning lady when the cost of the service is equal to or less than what you make on a pre-tax hourly basis.  If you’re willing to trade one extra hour at your job for one hour less of cleaning then it’s a decent idea to hire a cleaning lady.  Personally, I wouldn’t mind paying around $20/hr for a cleaning lady and I think I’ve finally found one who fits the bill.  The problem with all the cleaning services I was looking at before was that they all were small businesses.  So they had lots of overhead and the cleaning ladies who did the cleaning probably didn’t see more than half of that $30/hr.

I decided to look for someone who was basically their own one woman business.  That way, there’s no overhead and the person you pay is getting most or all of the money in cash.  Recently, I did end up finding someone who was willing to clean my place for $90.  It’s not quite the $20/hr I wanted to pay but it’s definitely closer to what I’m willing to pay.

Readers, have you ever hired a cleaning service or cleaning lady?  Do you think it makes sense to pay someone $30/hr to clean your house when you only make $20/hr yourself?