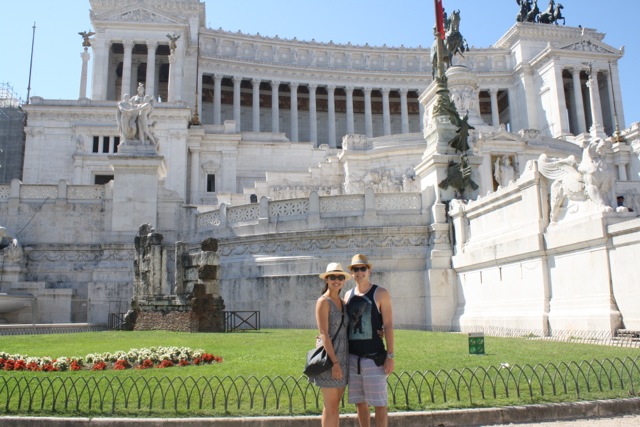 The Westin didn’t have four consecutive nights available using the Cash and Points option so I decided to spend the third and fourth nights at the Intercontinental de la Ville.  This was my first time staying at an IC property so I was eager to check it out.  The hotel was also located in an amazing spot right on top of the Spanish Steps.

Prior to the trip, I made sure to let them know via e-mail and Twitter that we were coming for our honeymoon.  And after we checked into our room they sent up a nice bottle of champagne.  We had a nice room with a courtyard view and small balcony, pretty standard for Rome.  The front desk told us we got a room upgrade but I don’t see how the room could have been any smaller.  I think a lot of hotels consider a better view or a balcony an upgrade.  I guess something is better than nothing when it’s free anyways. 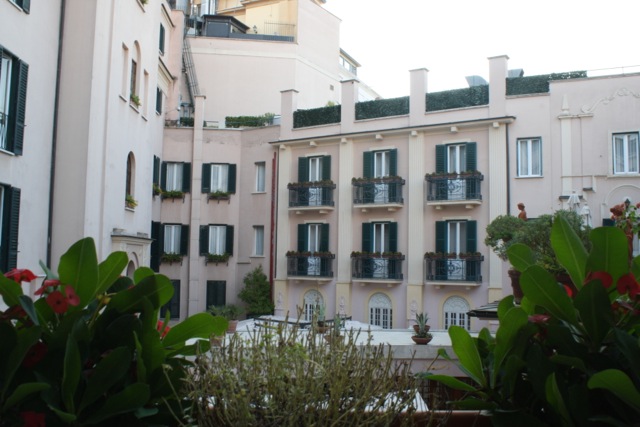 Either way, I really liked the room and if I would have been paying cash, this room valued at $300 is a much better value than the Westin at $500/night.  Still, I think if you’re going to pay cash there are some small boutique hotels spread across the city that are going to give you a little better value.  Even though this room was $200/night cheaper, the rooftop restaurant was still ridiculously overpriced with a 35 Euro breakfast and 11 Euro beers (the cheapest alcoholic drink on the menu).

In big cities like Rome, I’ve found that it rarely makes sense to pay for an expensive room.  More often than not, you’re just paying for the name and the amenities.  And that’s why I love paying for all these expensive hotels with points so much!  It allows me to see a side of travel that I would never experience otherwise.

So far most of my tips on Rome have required a lot of money.  Rome is not the cheapest city in the world but there are still lots of great activities you can do that are free or very inexpensive.  We spent a lot of money on the trip but we also did a good job of balancing out our more expensive items with some fun free stuff here and there.

Our hotel for the last two nights was literally right on top of the Spanish Steps but unfortunately the fountain and the church up top were both under construction.  So while we couldn’t really get the full effect, it was still a cool place to hang out and at night time there were guys walking around slanging ice cold beers for a couple Euros.

There was also a good sandwich shop right down the street called La Sandwicheria that we ate at.  So if you’re interested in a casual dinner, I recommend getting a sandwich from there, ordering a beer from the entrepreneurs in the area and relaxing on the Spanish Steps.  You could do this for lunch too, but it was way too hot while we were there to eat lunch on the steps.

Trevi Fountain and The Pantheon

These two sites and the Spanish Steps are all very close to each other so it’s probably a good idea to do them all in the same day.  Unfortunately though, The Trevi Fountain was also under construction while we were there – someone in the Italian government really screwed this one up because there were quite a few people we talked to who were genuinely pissed about all the construction.

Either way, we still walked by and took a look at the fountain.  The Pantheon was a cool place to visit too although it doesn’t take very long to see it all.  The nice thing about Rome is that even though things look spread out on the map, everything is relatively close to each other.  As long as it’s not too hot out, you can pretty much walk anywhere in the city.

But since it was so hot, we found the best times to explore were during the mornings and at night from around 6 pm and on.  I really enjoyed walking around Trastevere right before dusk since there is a lot of cool architecture and old buildings.  If you keep your eyes out, you’ll find a lot of re-used materials (like marble slabs from the Colosseum, Egyptian heiroglyphs, etc) in the sides of buildings.

Villa Borghese is like the Central Park of Rome.  We explored the area on our first night before dinner and it was very peaceful.  During the day, they have a tram that goes around the entire park for only 3 Euros per person.  This was actually one of the highlights of our trip since it was tough to find things to do (other than eat, drink or sleep) from about 1 pm to 5 pm when it was 90 degrees + outside.  We ended up just relaxing on the tram for about an hour as it drove around the park. 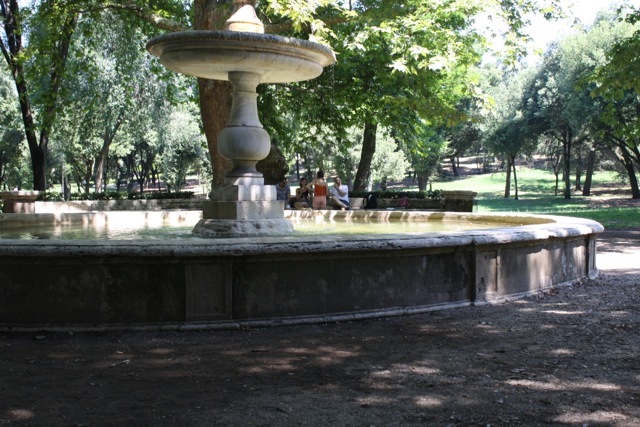 On our last day in Rome, we went back to the park and had a little picnic near a peaceful water fountain.  It was a very relaxing lunch and afterwards we planned on visiting the Galleria Borghese but it was sold out until 5 pm the next day.  I’ve never even heard of a museum selling out before but this one is very popular due to the Caravaggio exhibit and a few others.

I wish the Vatican would do something like this since they have clearly completely sold out (not in the good way) and are just trying to get as many people in and out as fast as they can.  Either way, this was the one regret of the trip so I advise you to book your tickets ahead of time for this museum and try to do it during the middle of the day since it’s a good hot outside, cold inside activity.

We were thinking about doing a day trip on our last day in Rome but it was quite expensive and we wanted something a little more relaxing.  Once it cooled down a bit, we took a taxi to the Baths of Caracalla and did some sightseeing.  Afterwards, we walked over to the start of the Ancient Appian Way and rented bicycles.

Looking back, it would have been a better idea to get dropped off at the bicycle rental shop since it was a pretty far walk (the local maps are not to scale outside of the city center).  There are some really cool Catacombs in the area too that are a great tour and it’s very cool down there too so it’s a great activity when it’s hot out.

The first part of the Appian Way is a great relaxing bike ride but once the road turns into cobblestone it gets a little uncomfortable.  If you decide to go this far, make sure you rent an actual mountain bike.  We had hybrid bikes that didn’t really cut it even though they were only 3 Euros/hour to rent. 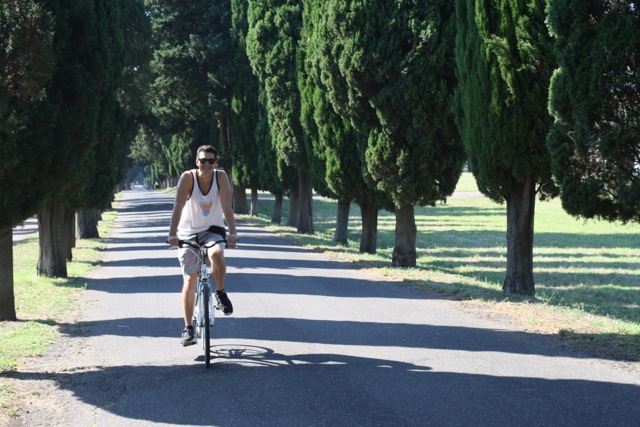 July isn’t the ideal time to visit Rome due to the crowds and the heat but since my wife goes back to school so soon it was unavoidable.  Looking back, I would obviously rather go during spring or fall but I wouldn’t mind a summer trip if the alternative was not going at all.

Here are all the tricks we used to stay cool:

– Book cool tours and do cool things during the day: I don’t mean cool as in hip, I mean physically cool.  We opted for the underground tour of the Colosseum since most of the tour is in the shade and the Catacomb tours also kept us cool.  Like I mentioned above, we tried to do a museum on our last day during the middle of the day but it was sold out.  That’s another good idea though for when it’s hot out.

-Get up early:  We both love to sleep so we didn’t really do this one but Rome is a beautiful town in the mornings.  It’s very nice out and there are no people on the streets.  If you’re an early riser, you will love Rome and you can take a little siesta after lunch when it gets hot out

-Drinking Water is Abundant: Rome is clearly not having any problems with drought like we are here in California.  There is fresh water everywhere and it’s constantly running.  Water fountains in the city center are always on and we learned a cool trick where if you hold your finger over the spout a secondary stream will shoot upwards so you can drink Italian water like a local.

-1 Euro Water – I already mentioned the entrepeneurs selling beer but there are even more guys selling waters for 1 Euro.  Some of them even have completely frozen waters that are pretty much a steal for 1 Euro.  Hold out until you find someone selling a frozen water and make sure they give you the frozen one.

-Cooling Towel – I tried out a cooling towel that I bought off Amazon and while it definitely helped, it was a little bit annoying to store at times.  Luckily, my wife was able to keep it in her purse when we weren’t using it.

My wife and I picked Italy for our honeymoon because we wanted to do something a little different.  Most people go and lie on a beach for a week but we can do that here in California (or Mexico, or Hawaii).  Instead, we wanted to do a nice mix of sightseeing and relaxing, Rome was the sightseeing part.  I definitely enjoyed my time in Rome but it was pretty crowded and it was damn hot.

I would have liked to see more of Italy but the logistics of flying to Greece afterwards made it a little tough.  We had to fly in and out of Rome and I didn’t want to waste two travel days in Italy.  We’ll definitely make it back to Italy at some point in the future but we probably won’t stop in Rome for more than a day or two.  On our next trip to Italy, I’d like to spend two weeks visiting Venice, Florence, Cinque Terre and the Amalfi Coast.

If you’re heading to Italy for the first time, I definitely recommend that you spend at least 2-3 days in Rome but try to come when the weather and crowds are a little better.  And if you’re anything like me, you probably won’t be able to completely cut loose due to the exorbitant prices.  Rome was a cool experience but there are a lot of places in this world that I would go back to first.  Hint, hint.  🙂

Readers, what do you think about all of the PF Pro-friendly activities we found in Rome?  When you go on vacation to somewhere super expensive like Rome are you able to completely let go and relax or are you like me and always thinking about how much everything costs?