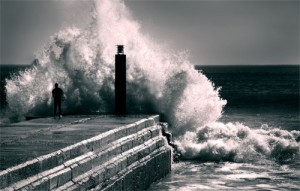 When I graduated college four years ago, I faced a tough job market with very few prospects.  I had a couple interviews but I was only offered one position as a navigation/systems engineer in Palmdale, CA. Even though it was my only offer at the time, it was still a tough decision.  I debated about taking the job because I had lived in SoCal all my life(never more than 10 minutes from the beach) and I can assure you that Palmdale was/is no Southern Cali!  I really wanted to turn down the offer but I had nothing else.  I couldn’t justify staying in San Diego with no money and no job over a good job with a great salary, even if it was in the middle of nowhere.

Ultimately though, through a very random networking connection, I landed my current job as an aerospace engineer in San Diego.  The pay for the San Diego job was about 30% less than Palmdale but I didn’t care about the money.  I was grateful to stay in San Diego and be with my friends and stay close to family.  But time and time again, I see examples of people leaving great jobs just because another one might pay more.  I don’t understand why anyone would leave their family, friends and a good life for a little more money, but that’s just me.

I asked a few friends of mine how much money it would take for them to leave San Diego and the answers I got were all over the place, ranging from nothing to 2x the pay.  There are a lot of factors at play and although I generally talk about how to save money and make more money, this is a time when more money is not necessarily better.

I’m a big NBA fan so when I saw this story at the beginning of the year I immediately related it to personal finance.  I wanted to see how things would play out though before writing about it and it looks like my assumptions were right.

Although this example focuses specifically on James Harden, I see it over and over in professional sports.  Players leaving great situations in order to get paid!  I think professional athletes are some of the worst offenders because of their already inflated salaries.

The difference between a 75k income and a 100k income is a heck of a lot more meaningful than the difference between a $7.5 million and a $10 million income.  A $100k salary will allow you to invest in real estate, max out your retirement accounts and even get outside help from an investment tracking service.  A 10 million dollar salary will not buy a whole lot more than a 7.5 million dollar salary would get you, ok maybe you could get a couple more Ferrari’s after taxes.

So last year James Harden played for the OKC Thunder who made it to the NBA finals but lost in 5 games to the Miami Heat.  The core three players(James Harden, Kevin Durant and Russell Westbrook) on this team were all under 25(including Harden) and were poised to hold a 10 year lock on the Western Conference(just like the Heat in the Eastern Conference with Lebron, Wade and Bosh).

As a Lakers fan, this scared me!  There was no doubt in my mind that my Lakers would never be able to get by that team as long as they had those three talented players.  The other two players were already signed to multi year contracts but Harden’s contract was coming to an end this year.

If Harden played out the season without signing an extension during the year, he would be free to sign with another team.  So the Thunder’s options were simple: sign him to a multi-year contract or trade him to get something in return if he wouldn’t sign an extension.  OKC ended up offering a 4 year deal worth an average of 13 million dollars per year.  Harden turned them down and was soon after traded.

He ended up signing an extension with the Houston Rockets for 5 years with an average salary of 16 million dollars.  His deal ended up netting him 23% more per year plus tax savings(there’s no state tax in Texas so that’s a tax savings of  1/2 x 5.5% x 16 million = $440,000 since only half of the 82 games are played in Texas).  James Harden now plays for the Houston Rockets where he averages career highs in minutes and points per game.  Unfortunately, his Rockets are not doing too well(9-10 on the season) while OKC is rolling at 17-4 with the best record in the league.

Is it Really About the Money?

I’ve seen arguments that say Harden wanted to prove he was a star and that’s why he didn’t want to sign with OKC.  But I don’t believe that for one second.  Harden was a star with OKC.  Although he came off the bench, he was 6th man of the year and was one of their best players and always had the ball in his hands at the end of the game.  Getting paid more is always nice but are there other reasons to leave a job you like?  No matter where you work, I think it’s pretty easy to distinguish yourself if you have the motivation and drive to do so.

I think the one thing that makes it hard for me to consider moving far away for a job is my family.  It’s nice to be able to drive home for Thanksgiving and Christmas and see all my family and high school friends.  If I moved to the East Coast, I might not be able to see my family every year.  James Harden’s family is from California so that probably didn’t matter much to him when he was deciding on whether to resign with OKC or not.

Ultimately though, I think he signed with the Rockets because he could make more money and prove to everyone that he could lead a team on his own.  So far he’s definitely making more money but at what cost?  His old team is off to a great start so maybe he wasn’t that valuable after all.

Personally, I’m very happy with my job and my salary, and if I wasn’t, I would definitely look to make a change.  Don’t get me wrong, I’m sure there’s some amount of money out there that would make me leave but I’m positive no one will be offering it to me anytime soon.

Readers, have you ever left a great situation to get paid more?  How much money would it take for you to leave your job and family and is a higher salary always what it’s cracked up to be?