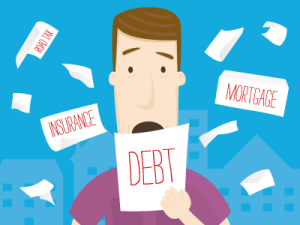 This is a guest post by Todd at Fearless Men.  Head over to his blog and check out what else he has to say if you like this article!

There’s a never ending list of ways to get into debt. Overspending. Using credit cards and only paying the minimum balance. Using credit and NOT paying. Not paying bills. Letting overdraft fees ramp up. Taking on bad loans. Losing money in bad, or even good investments.

But WHY do people go into debt? That’s a much bigger, less specific, but more powerful question. And I think it’s more important.

We’re not discussing here the particular how’s of getting into or out of debt, but the big WHY of people getting into debt. Let’s take a look at one of the root issues many people in financial straits struggle with. If that can be rooted out, some people can be saved from getting into debt in the first place, or spiraling further down the debt tunnel.

What is one of the roots that shuttles people to Debt Island?

That’s it. Simply fear. Fear so strong and so loud that people can’t help but listen to it. Second guess themselves. Hesitate. Let their conscious gnaw at them. Lose their confidence.

Then fear becomes so powerful it paralyzes them.

What happens when fear seizes upon someone that’s in or headed towards debt? A few things.

1. Fear paralyzes people from looking at their finances.

Looking at a growing credit card bill can be so emotionally daunting that an in debt person just simply wants to turn away their eyes. They may not login to their credit card and bank accounts for weeks or even months.

2. Fear paralyzes people from looking at their growing interest bill.

Sure, maybe they have autopay set up, but that’s only so they don’t have to look at the painful interest they are accumulating.

If you’re not in lazy mode, you may not appreciate how powerful fear is over people. When people are discouraged, it can be hard for them to even roll out of bed in the morning. Let alone login into their Citibank account and make extra payments on three cards each with $5000 of debt accruing interest.

If you’re a person that’s stuck in this cycle—a fear of failure so strong that it’s caused paralysis, there’s hope. Many people have been stuck in the same lonely spot you’re in, and they successfully navigated out of it.

Here’s what you can do:

Whatever’s drawing you back, don’t turn from it anymore. Acknowledge it. Know that you’re experiencing it, and it’s time to face it.

What is it that you’re specifically afraid of? What’s paralyzing you and holding you back? Is it the fear of someone finding out your in debt? Is it the lingering voices in your head?

Is it the fear of losing your house or your spouse? Identify those things, register them, and feel them.

I know it’s simple, yet that doesn’t make it easy. You know you already know the first step. And that’s mashing your snooze button, rolling out of bed, logging into your looming account, and paying it down some.

I know it might hurt to look at the numbers, but do it.

4. Identify the next problem or habit

Now that you’ve made some steps in the right direction and are paying down debt, identify other habits that need to be eliminated to increase your frugality.

While you’ve got a breath of psychological fresh air, keep moving forward with your newfound momentum!

This is a guest post written by Todd. He’s the co-founder and content manager at Fearless Men, a blog on Manliness that inspires men to grow strong, get fit, be wise, kick fear in the face and become a better man.