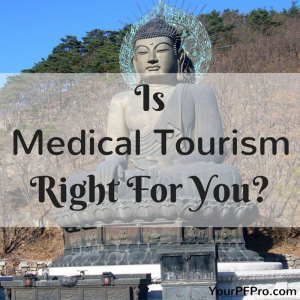 Finding cheap and affordable health care is always tough.  Today, PF Pro contributor, Melissa the Sunburnt Saver tells us all about her experience with medical tourism.

The cost of medical procedures in the US is often difficult to determine. As we learned from Harry’s experience, prices can vary dramatically, if you can even get an accurate price up front.

What you may not know is that prices in other countries vary as well – often in Americans favor. Many Americans, particularly retired Americans, are increasingly looking to other countries for routine medical procedures such as knee replacements or dental care.

While once looked down upon as a risky, cheap way to avoid paying for quality American medical care, medical tourism is increasing in popularity. Furthermore, if you live close to a country with quality medical care or are traveling, you may want to investigate medical tourism for yourself.

What is Medical Tourism?

Medical tourism is similar to regular tourism, but includes receiving medical care in the country you are visiting. In some cases, people combine their travel plans with medical procedures in order to have a vacation and receive medical care.  Medical tourism is a growing business, with an estimated 1.25 million Americans traveling this year outside the US for medical treatment.

Medical tourism is increasing in popularity due to lower cost and similar treatment.  Foreign doctors are well trained, yet they charge a fraction of the cost.  A knee surgery in Mexico will cost just $12,000 while the same exact procedure would be $50,000 in the US!

Depending on where you go, you can receive quality health care in another country at a fraction of the price. According to Patients Beyond Borders, an organization that provides information to medical tourists, some of the most common and popular medical procedures include:

The biggest benefit of medical tourism is how much you can save on on high quality, standardized care. A 2013 Comparative Price Report by the International Federation of Health Plans has a wide variety of procedures that compares the US cost to costs around the world, primarily Europe but also South America, Canada and New Zealand.

For example, an appendectomy in the US averages around $14,000. The same appendectomy in Spain costs less than half: an average of $2,200. For more expensive procedures, such as a hip replacements, the US cost averages $26,000, whereas Spain averages $8,000.

Beyond costs, many countries are investing heavily in medicine specifically to lure medical tourists. India and Singapore have now become globally recognized for their cardiac care, on par with the US at a fraction of the price. South Korea has invested heavily in medical procedures and is now known as the plastic surgery mecca of the world. According to Forbes, “Korean doctors are some of the best in the world, and their technology is top of the class.”

Medical tourism does not come without its critics, and rightly so. Certain precautions to be aware of include quality of care, your health care coverage, and legal protections.

The Centers for Disease Control and Prevention list a few things to consider, including:

Other things to consider when traveling abroad for health care include your own health care coverage. If you have health insurance, call your provider and see if they cover out-of-country procedures. Some health plans do, but it varies according to which type of plan or health provider you have.

In addition, you may not have the same legal protections against doctors that do poor quality work as you do in the United States. The Organization of Safety, Asepsis, and Prevention, an organization that focuses on oral healthcare, suggests you ask for recommendations from other Americans who have had procedures done in other countries, the American consulate or Embassy, or hotel staff in the country you are visiting.

Personally, I went to another country for dental care and received stellar service at a fraction of the cost I would have paid in the US. If you’re concerned about quality of care, take the steps I did to ensure you get the best care while out of the country.

I went to Mexico for a fairly common dental procedure: wisdom teeth removal of 2 teeth. The process wouldn’t have been very expensive, around $1,000-$1,200, including sedation. However, I didn’t have dental insurance and couldn’t afford that expense, so I decided to go to Nogales, Mexico for the procedure. My parents also lived close to Nogales, which meant I would have a place to recuperate afterwards.

Before scheduling any appointments, I researched online forums discussing dentists in Nogales, Mexico, visited people close to the border to ask about their experiences, and, luckily, had my Dad’s experience with his dentist. Yes, we’re a family of medical tourists. By far the most beneficial way to find a dentist was word of mouth: by talking to people near the border, at check out lines and in restaurants, I learned the questions to ask and dentists to definitely avoid.

I visited Nogales to interview 3 dentists before scheduling my procedure. I asked them questions about how they did the procedure, how many removals they had done over the course of their career, and if they could show me their office. In these visits, I learned more about the dentists, but also got a feel for the intangibles like: did I feel comfortable with this dentist? Could I have a conversation with him/her and clearly understand them? I speak Spanish, but I wanted an English-speaking dentist because I wasn’t sure how good my Spanish would be after coming out of sedation.

In the end, the procedure was easy, quick, and fairly painless. The exact cost I can’t remember, but it was much less than half of what an American dentist would have cost. I did have to pay in full before leaving, but a ~$400 bill was more affordable than a $1,000-1,200 bill.

Is Medical Tourism for You?

When I share my story of medical tourism, I get a lot of criticism. Interestingly enough, it’s usually from other American doctors and dentists, who deride non-American doctors (particularly Mexican doctors) as “not as good” as American doctors. Many people also seem afraid of the risks of going to another country, usually the risk that the doctor isn’t as skilled as an American doctor and could make grave mistakes. Obviously, I don’t agree with all of these mischaracterizations: dental work is not the only care I have received while in other countries, and so far I’m still alive (and I’m pretty sure I still have both my kidneys, too).

As long as you do your research before you go and choose a reputable doctor, your chances of success are just as great in another country as they are in the US. Saving money on the procedure is just another benefit.

In the end, medical tourism comes down to your comfort and how much you would like to spend. Take into account how much it costs to get to your destination as well. If you’re having a procedure done that costs $10,000 in the US and $6,000 in Spain, it may seem well worth it. However, if your flight and stay in Spain costs you another $4,000, that procedure won’t save you anything.

Today, medical tourism isn’t only for retired people or those looking to save money on cosmetic surgery. Increasingly, many Americans are looking to medical tourism to avoid unnecessary medical tests, lack of transparency in prices, and ever-increasing medical costs for common medical procedures. While medical tourism may not appeal to some, or may not be possible, it is certainly something to consider in the future.

Would you ever consider medical tourism, either right now or in the future?