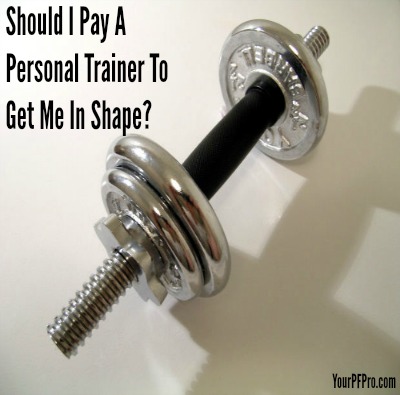 I’ve had a gym membership ever since I was 15 years old.  As a high school sophomore, I decided that I’d had enough of being a scrawny little weakling so I made my mom sign me up for the local 24 Hour Fitness.  It wasn’t like I really needed big muscles to run cross country or play volleyball but I did want to be a little more in shape.

I was a pretty financially savvy kid at the time too so I convinced my mom to pre-pay three years in full.  That way, I would get a rate of $99/year for the rest of my life.  Now that’s a hedge against inflation right there if I’ve ever seen one 🙂

Fast forward 10+ years and I still work out in spurts, but to be honest, I would much rather play some beach volleyball or go surfing than sit in a dark and sweaty gym for an hour with a bunch of other dudes.  Add in the fact that I pay so little for my membership, less than $9/month, and it’s pretty much made me take for granted the fact that I have access to a gym.

I’m still pretty good about staying active: I play all sorts of sports, go on hikes, bike around, etc. but I don’t really go to the gym as much as I should.

I enjoy working out but there are A LOT of other things I would rather do.  If I have a workout planned for after work, just about anything can throw me off my game: happy hours, Monday Night Football, etc.  For me, it’s generally a problem of motivation to get to the gym.

I’ve been blessed with good genes (this is a huge part of staying in shape if you ask me) and I eat somewhat healthy, so it’s not hard for me to stay in decent shape.  So whenever I notice that I’m gaining a little weight, or my wife starts calling me ‘fatty’ a little more often than normal, I know it’s time to hit the weights.

(I despise running for the sake of running by the way.)

What Can A Personal Trainer Do?

I actually enjoy the feeling I get after a workout but it’s hard to motivate myself to go.  That’s where a personal trainer can help big-time.  PT’s are great because they motivate you, keep you on a specific schedule and you have to pay for them.  There’s no way you’re going to cut your workout short if you’re paying $50/hr for it.

That’s one of the main reasons why I think so many people use them.  You don’t really need someone to plan your workout for you.  You could do it yourself online in about 5 minutes or just make it up as you go along.

My Workouts Kind Of Suck

I know there are lots of people out there who can go to the gym, hit it hard for an hour straight and then go home.  But I’m not one of those people.  I know that I need to work out and I like the feeling I get after a work out, but it’s just hard for me to do it on my own.

So how can I make my workouts a little better but at minimal cost?

I think personal trainers work great, but they’re pretty expensive.  I figured there had to be better ways to get a great workout but for less, even for people like me who are lazy and lack motivation.  My next stop was the crossfit type classes.  Again though, some of these classes cost as much as my year long membership to 24 Hour Fitness, so that wasn’t going to work.

My Solution: Find A Friend

The best solution I could find was also one of the simplest and most cost-effective: find a friend.  Over the past few months, I’ve been working out with a friend 1 to 2 times a week and it’s been great.  It’s fun to work out with someone you know and it’s also a lot easier to push yourself since you don’t want to seem like a wimp in front of your friend.  There’s no leaving after 20 minutes because you’re tired, that just wouldn’t be very manly.

Since we plan when and where we’re going to work out, it’s also tough for me to cancel on him.  If I do cancel, I need to have a really good excuse.  I rely on him to motivate me on those days I don’t really want to work out and he does the same with me when he doesn’t want to work out.

I don’t have as much fun working out by myself but I definitely still do it from time to time.  But here are some strict guidelines that I need to follow:

Readers, what do you think about the solution to my ‘working out’ problem?  Do you think it’s ok to stay active by playing sports, hiking and biking?  Or does a good physical fitness regimen require that you go to the gym at least once or twice a week?