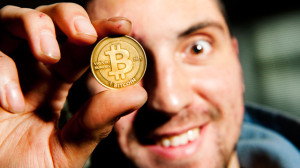 If you’re like me, you’ve probably sent a peer to peer payment before.  Whether its the monthly rent, or gambling debts owed to a friend, sending money through Paypal or similar services is pretty easy(and free!).  Bitcoin essentially does the same thing but with its own currency.  Yes that’s right, Bitcoin has its own currency that can be used to pay for merchandise/services all across the web.

Bitcoin can be exchanged through a computer or smart phone app without the help of a financial institution.  In order to acquire Bitcoins you need to pay money for them or trade some type of service with someone who already has some.  You can also try your luck at ‘mining’ Bitcoin which essentially forces your computer to do memory intensive calculations in order to receive a fraction of a Bitcoin.  Most Bitcoins are already out in the market though so your best bet is to pay cash or trade some type of service for them.

The Price and Volatility of Bitcoin

I think part of Bitcoin’s huge price increase has to do with the recent Cypress bank tax.  Since Bitcoin is not owned by any government or organization, it requires a majority vote of Bitcoin holders in order to change any lines of coding.  The Cypress Bank Tax would have been the first case we’ve seen where a government decided they had the power to go in and take your savings away from you.  That would never happen with Bitcoin since there’s no one that can come after that money.

Ever since I was young, people have told me that when you put your money into a bank it will stay safe.  I know I can’t expect great interest rates anymore and it might not be worth as much due to inflation when I take it out but I didn’t think I could ever lose money.  In the US, we have FDIC limits that guarantee(up to 250k) our money.  As we’ve now seen, those guarantees aren’t nearly as strong in other countries.

There aren’t many black market drug dealers who take credit card but what if they took Bitcoin?  Bitcoins are untraceable and considered the online form of paying with cash.  A lot of critics have pointed out the negative uses of Bitcoin but I think the benefits more than outweigh the drawbacks.  Any time you involve a middle man like a bank or the government, you lose.  They’re always going to want their cut or make things in-efficient.

As for how I would use Bitcoin, I don’t think the government should be allowed to tax the money I make online since I could be making that money anywhere in the world.  It would be nice to get paid for all the work I do online in Bitcoin since the US government would have no record of it and wouldn’t be able to tax it.

I hate having to exchange money, worrying about ATM withdrawals in foreign countries and so on.  Even though the dollar is widely accepted throughout the world, it would be pretty cool to be able to pay with Bitcoin in any country around the world.

Bitcoin as an Investment

Although Bitcoins were designed to be used as a form of digital currency, most people these days are just hoarding Bitcoins.  Why would anyone pay 20 Bitcoins for a tv today when they can wait until tomorrow and it will only cost 19.75 Bitcoins?  So you have the hoarders and you also have the Bitcoin investors, people who are looking at Bitcoin as an investment and holding it until a later date so they can sell for a nice profit similar to what you would do with gold or stock.

It seems like I’m a little late to the Bitcoin party so I won’t be investing any money in it.  But should you decide to invest in Bitcoin remember that you shouldn’t invest anything you aren’t willing to lose.  I don’t really see Bitcoins taking off in the future since no one is actually spending Bitcoins right now.  You can use Bitcoins on a few hundred sites across the web but I don’t think you’ll see any large retailers accepting Bitcoins anytime soon.  The price volatility makes it too risky for a company like Amazon or eBay to accept Bitcoin.

How Can Bitcoin Succeed?

Even though I do think Bitcoin is a bubble that will eventually burst, I like the idea of a non-regulated digital currency.  Most of the ‘dollars’ I use on a daily basis might as well be a digital currency.  I rarely use cash and any transaction over a couple hundred dollars is almost always performed online.  So in a way I would say that the dollar is already a digital currency.

Honestly, I don’t see a whole lot of difference between dollars and how Bitcoin is used.  Money is valued only as a medium of exchange.  Why is gold worth so much more than salt or pepper?  Most gold is traded electronically these days anyways so again I ask, why is gold worth so much?  Once the initial excitement and flurry of Bitcoin dies down I think it could become a legitimate form of online currency.  The main problem with Bitcoin right now is its volatility.  But once its exchange rate settles down, it could be a good way to pay and get paid all across the world and web.

Readers, have you ever heard of Bitcoin before reading this article?  Do you think it could ever become a legitimate form of currency or is it just a fad that will pass with time?