No this article isn’t about a Capital One Commercial, although I’m not gonna lie, any commercial featuring Samuel L. Jackson has got to be good!  Instead, today we’re going to dissect exactly what is and isn’t in my wallet.  I’ve been on this weird semi-minimalist kick over the past few months where I’m trying to make my life more efficient by removing everything that I don’t use.  And even though it might not seem like a big deal, most people’s wallets carry a lot of un-needed junk.

In fact, my minimalist streak isn’t limited to material things either.  I’ve turned off all push notifications on my phone (E-mail, FB, etc) in an attempt to be more efficient and I try to only check e-mail a few times a day now.  I can’t tell you how many times I used to look at my phone just to look at it.  Wait, so where was I?  Right, back to my wallet!

No Costanza Wallet For Me

I actually used to sport a pretty large wallet with all sorts of loyalty cards, coupons, receipts, cash and credit cards.  But a few years ago I switched to a smaller wallet and loved it.  I even experimented for a while with a hair band wrapped around my cards and cash.  It worked ok but I ended up wanting something a little bit nicer.

While browsing for a gift for my brother’s birthday (he wanted a wallet) I ended up finding a half wallet/half money clip that would end up suiting me perfectly.  It was only $10 on Amazon and after a couple months of use it has now become my favorite wallet ever.  So let’s take a look and see what’s inside of it.

Right now, I’m taking a little break from churning cards because frankly I’ve gotten so good at it I can’t spend the points fast enough.  I’ve spent almost 600,000 points (got about $15,000 in value out of them) in the last year alone and my aggregate account balance according to Award Wallet is still over seven figures.  Obviously, this is a good problem to have but it also means that I get to go back to spending on just one credit card for now instead of trying to hit a bunch of minimum spends on new cards.

The one card I keep in my wallet right now though is my Chase Sapphire Preferred Card.  It gets me 2x points on travel and dining and 1x on pretty much everything else.  I have a few cards that could get me a little higher cash back on certain items like gas and groceries but for me it just isn’t worth the hassle of carrying around an extra card.  Remember, I’m trying to become a more minimalist-simple-efficient person.  And the cash back pales in comparison to the rewards I can get from just one sign-up bonus.

By the way, if you’re interested in signing up for the CSP card you can get a 40,000 point bonus when I send you a referral link.  I’ll receive a small commission so it’s a great way to support the site.  E-mail me for details.

I will never ever understand why anyone would pay an ATM or checking fee when there are so many banks that offer these services for free.  I haven’t paid an ATM fee in over 5 years and that’s why I carry my Ally ATM card with me everywhere I go.  I can’t tell you how many times I’ve had friends tell me, “Dude, we need to find a Chase ATM”.  Don’t let ATM’s control your life, get a good ATM card from an online bank like Ally or Chuck Schwab.

My wallet/money clip has a nice little ID card holder that faces outwards so most of the time I don’t even have to take my driver’s license out of the wallet if someone wants to see it.  See how efficient that is.  There’s not much else to say about this one.

Since I’m always networking and talking to people about my online businesses it’s imperative that I have at least a few business cards on me at all times.  I try to keep two cards for my finance blog and two cards for my rideshare site on me at all times.  I would keep more but my wallet wouldn’t really be able to handle them.  I do keep spares in my car, at work and at home though just in case I run out.

I rarely have cash but since I just got back from Vegas I had a lot at the time.  And since this wallet has a really cool magnetic money clip, it’s easy to keep it in place.  Most of the time though, I normally only carry $20 or less in small bills.  If I really need more than that, I can stop by any ATM or pay someone with Venmo 🙂 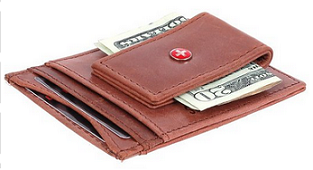 So those are all the things that I carry in my wallet.  Were you surprised at how little junk/clutter there is and what would you say about your own wallet if you had to do an audit?