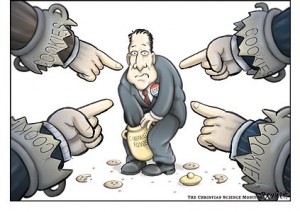 A reader writes in:  “Can you talk about when to take a loan from your 401k?  I took one a while back and I think it would be a good topic for discussion.”

There aren’t many loans out there that allow you to borrow without a credit check and pay yourself interest, but that’s what a 401k loan does.  Sounds pretty awesome right?  Well it isn’t all good, and although pundits argue that 401k loans are a good alternative to commercial loans and definitely a better choice than an outright distribution, a 401k loan goes against the whole principle of retirement investing.

Most 401k holders may not even realize what the point of a 401k is.  A 401k allows you to defer your income to retirement and invest that money in the mean time.  Your tax-deferred money continues to grow through contributions and capital appreciation until you have a nice nest egg to withdraw from in retirement.  This concept may seem foreign to many of us because it’s so far in the future, but a 401k is one of the best tools investors have to save for retirement.  Any time you take a loan or distribution from your 401k, you’re stopping this ‘snowball’ effect.

When Does it Make Sense?

A 401k loan makes sense when you have to borrow money and you have no other options.  A regular withdrawal(before age 65) from your 401k will automatically trigger a 10% penalty plus taxes at your ordinary income rate, so this should be avoided at all costs.  In the last ten years, there’s definitely been a rise in 401k loans for things like vacations and child’s tuition but I don’t think 401k’s should ever be tapped for this type of non-essential spending.  Young people often over-estimate their ability to pay back loans and America’s high rate of credit card debt proves that.  I understand why a 401k loan might seem tempting, but I think the bad definitely outweighs the good.

The Bad About 401k Loans

I think the biggest negative impact from a 401k loan comes from the fact that you are missing out on 5 years of compounding.  In the finance world, compounding is referred to as the eighth wonder of the world.  Compounding allows your money to grow each year by adding gains or interest back onto the principal.  If you’ve ever used a 401k calculator, you can see the wonders of compounding.

Some companies have provisions that do not allow you to contribute when you’ve taken a 401k loan out.  This can be devastating if you normally receive a company match because you are now losing your regular contribution, the company’s contribution and any potential capital gains from investments.  Although you are paying yourself interest at a market rate, with interest rates so low, there’s not much gain to be had there.

A quick myth that I’d like to dispel here is the 401k double taxation myth.  If you google this subject you will find hundreds, even thousands of articles that incorrectly state that when you pay back your loan you are doing so with after-tax dollars and that even worse, when you take this money out of your 401k in retirement, you’ll be paying taxes again.  Hence, the double taxation.  It doesn’t matter where you get a loan from, whether you borrow $100 from a bank or your 401k, you would still have to pay back this loan with after-tax dollars.  What they should be saying is that a 401k loan is not tax deductible.

The last major risk of a 401k loan comes with the risk of termination, whether through layoffs or being fired.  If either happens to you, you must pay back the 401k loan within two months or the loan will be re-categorized as a withdrawal.  An early withdrawal would cause you to pay federal taxes, state taxes and early distribution penalties.  Yikes!  This is probably the scariest scenario for me, I would not want to be caught in this situation.  Usually, you will only have 60 days to pay back the loan before it gets re-categorized as a distribution.

While a 401k loan has some benefits, I think it should generally be avoided except during a genuine financial emergency.  If you’re turning to a 401k loan for anything other than an emergency, it may suggest that you are living beyond your means.  Don’t think of your 401k like a savings account, think of it like a time-locked vault that can’t be opened until you’re 65.  If you can’t think of any other way to fund your current spending habits than stealing from your future self, it might be time to re-evaluate your spending habits.

Readers, have you ever taken a loan from your 401k and if so were you able to pay it off in less than 5 years?  Do you think a 4o1k loan makes sense in certain situations or should it be avoided at all costs?