Editor’s Note: Leave a comment below to be entered to win one of two copies of the book! 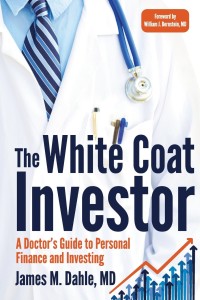 It was right around this time one year ago when we found out that my fiancee had gotten into medical school. She had always dreamed of becoming a doctor and now she was one step closer. For those of you not familiar with the process, just applying to medical school is an arduous task. It’s like applying for college all over again but it takes way more time and it’s way more expensive. There are applications to fill out, the MCAT to study for and(if you’re lucky) interviews all across the country.

But in the end, it was all worth it since now she’s one step closer to becoming a doctor. I was ecstatic for my fiancee when she got in, but naturally I started thinking about the financial side of things and how we were going to pay off nearly 200k of debt. One of the resources that has helped me tremendously is a blog called, The White Coat Investor. It’s run by an ER doc named James Dahle but you would never know that his formal training is in medicine based on how much he knows about personal finance.

His background is a lot like mine and that might be one of the reasons why I like his blog so much. I too, come from a non-financial background(aerospace engineering) but at times I feel like I know more about investing and personal finance than I do about my day job. Hopefully Jim knows more about being a doctor though.

Jim recently released his book, aptly named, The White Coat Investor and he gave me a couple copies(one to read and one to giveaway) so I thought it would be the perfect book to review as party of my ongoing series. On to the review:

The first thing a casual reader might ask themselves about this book is does it apply to me? Even though it is clearly tailored towards medical students, residents and practicing physicians, there is still a lot of valuable information in there that applies to all high income individuals(think lawyers, dentists and other professionals – even engineers like me).

This book is a must read for anyone involved in the field of medicine. The reason why it’s so good is that it covers everything you didn’t have time to learn during medical school, college and high school. Most people don’t seriously start thinking about their finances and investing until after college(that’s how it worked for me at least) but doctors usually go straight to medical school after college. And trust me there is very little time for learning anything other than medicine during those four years. Most med students are more likely to unwind with a beer and an episode of Real Housewives than pick up an investing textbook.

The path to becoming a doctor just doesn’t allow for much time to learn about investing but you need to make time. I think this book can provide the most value for medical students and residents since the earlier you start thinking about this stuff the better.

Doctors Ain’t as Rich as They Used to Be

The overarching theme that I took away from the book is that although the landscape for doctors is changing you can still live a pretty amazing life. Here are the facts: it’s getting exponentially more expensive to go to medical school and the average doctor’s salary is going down. That means that when you graduate medical school, you’re likely to have a large amount of debt and you won’t be getting paid the same amount as your colleagues from previous years.

One of the things I liked most about Jim’s book is that he doesn’t just tell you the facts, he proves them with numbers and statistics so you know he isn’t full of shit. Here are a few quotes from his book:

In a paper published in JAMA in November 2012, Seabury et al. compared median physician earnings from 1996 to 2000 with earnings from 2006 to 2010 and found a decrease from $166,733 to $157,751. This only looked at physicians over thirty-five(since many doctors under this age are still in training) and was NOT adjusted for inflation. If you adjust for inflation, that represents a decrease in real earnings of over 28%.

Those facts may sound kind of grim but the reality is that although doctors are taking on more debt they are still basically guaranteed a job when they graduate and starting salaries can still be in the 200-300k range depending on specialty and location. If you told me I could get paid 300k but have 300k in student loans I’d take that in a heartbeat since I know that debt could be paid off within just a few years if you live like a resident.

It’s tough to sacrifice so much for so long but that’s exactly what doctors are asked to do. They have to give up some of the prime years of their lives in order to pursue education and training so it only seems right that they should be able to splurge once they become an attending and start making the big bucks. But as the White Coat Investor discusses over and over, this is one of the worst financial mistakes you can make. It’s just not practical to take on a mortgage, a car loan and start spending beyond your means in your first year out of residency.

As a newly minted doctor, you have to resist the temptation of instant gratification.  Instead, think about paying off your student loan debt and investing for retirement because doctors are way behind the retirement savings curve. Just look at the example from my latest Ultimate 401(k) Guide, even if a 32 year old first year attending maxes out their 401(k) for the rest of their career they’ll never catch up to someone like me who’s maxed out his 401(k) for the past 8 years. Oh yeah, and I also get to stop contributing the same year the doctor starts. Let that sink in for a while and you’ll realize how badly doctors need to play catch-up when it comes to retirement.

Doctors Aren’t Above Average When it Comes to Investing

But alas, passive investing will only ever return the average of the market and established professionals like doctors and lawyers aren’t good at just being average. That’s where active managers and financial advisors come in: they are great salesmen. They know exactly what to say to get you to invest your money with them and before long you’ll be underperforming the market and padding their pockets.

The WCI does a great job explaining why doctors should stay away from these financial salesmen. There’s definitely nothing wrong with getting help when it comes to your investments but unfortunately most financial advisors are more akin to salesmen than you know, actual advisors. You have to know how your advisor is compensated(the WCI and myself both recommend fee only planners) in order to eliminate conflicts of interest. If your FA works for Wells Fargo and he gets a 1% commission on all the Wells Fargo funds he sells you do you think he’ll be more likely to sell you a Wells Fargo 500 Index Fund(with an ER of 2%) or a Vanguard 500 Fund(with an ER of .2%). That 1.8% difference can literally cost you hundreds of thousands of dollars over 30 years.

It’s kind of a Catch 22 since if you’re knowledgeable enough to know what a good financial advisor looks like you’re probably capable of do it yourself investing. But if you don’t have the basics yet, you’re probably stuck with one of these salesmen and don’t even know it.  My advice is to read this book or one like it so that you’ll at least have a basis if you decide to go the FA route.

What Did I Learn?

I love reading about personal finance since no matter how much you think you know you can always learn something new by reading other people’s material. One of the topics the WCI touched on that I found very fascinating was the chapter about protecting your assets. Unfortunately, we live in a sue happy society and doctors especially have huge targets on their back.

Imagine a scenario where someone trips on your stairs and hits their head and decides to sue you. In a normal world, everyone would call this person an idiot and move on with their lives. But in America, this is grounds for a lawsuit and you can be held liable for other people’s stupidity. Whether you think it’s fair or not(and it clearly isn’t fair but that’s life) you have to know how to protect yourself from things like this. The WCI does a good job explaining different types of insurance and also goes into detail about life insurance and disability insurance. New attendings are at their most vulnerable at the beginning of their career and that’s when they want to carry the most coverage yet most probably don’t carry enough.

All in all, I thought the book was great. For me, it was a little short but I like to read. It’s probably the perfect length for a busy med student or resident since it can be read in just a few days or 1-2 weeks. My only criticism is that it doesn’t go too in depth into the investing side of things: what to invest in, how to pick your asset allocation, etc. To Jim’s credit though, he does state this fact and gives countless resources to further your investing education. I think he also left the door open for a second book so I’ll be eagerly awaiting that one.

If you’d like to buy the book, please support the site by using my affiliate link and I will receive a small commission from Amazon:

Here are some other books that I think would go well with this one:

The Millionaire Next Door

Readers, what do you think about my review for the White Coat Investor?  Does it sound like something you would like to read?  If so, you’re in luck because I’m giving away two copies of the book(one paperback version and one Kindle version).