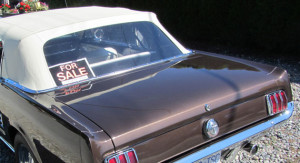 Having lived in Southern California my whole life, I’ve always needed a car to get around.  Even when I was young and I couldn’t drive anywhere, I still relied on my parents to drop me off at school, take me to soccer practice and wherever else I needed to go.  Now that I’m all grown up, I have my own car but to be honest, I don’t like driving it all that much.  Owning a car isn’t all that it’s cracked up to be for me because it’s so expensive.  Between buying the actual car, maintenance costs, insurance and gas you’re looking at a huge investment over a short period of time.

Southern California isn’t know for it’s public transportation but I wish it was better.  I’ve lived temporarily in cities with great public transportation and the extra time trains or buses took didn’t bother me at all.  It’s nice to be able to sit back and relax for a half hour and listen to music on your phone or read a book(although I have seen some people doing the latter while driving!) instead of fighting traffic on the roads.  And it’s obviously a lot cheaper than owning a car.

But no matter how good public transportation ever gets, there are still going to be times when it just won’t cut it.  Sometimes you might be in a rush or maybe you need to transport some large items.  I never would have thought it would be possible to ditch my car but with the emergence of various car sharing and taxi services, I think we’re almost at that point where not having a car could become feasible.  Let’s take a look at some of the options and see if I can ditch my car anytime soon.

This is probably your best bet in most cities, but in Southern California, public transportation is pretty inefficient.  It’s not too expensive but it doesn’t cover much ground and it takes forever sometimes.  In San Diego, I had the option to take public transportation to work but it would have taken about an hour versus a drive time of about 15 minutes.

I really like car sharing services like Car2go since it allows you to pick up cars using their smartphone app and leave them wherever you want.  It’s way cheaper than a taxi and almost on par with a traditional car since they’re electric and insurance is included in the per mile rate.  I pay $1,000 a year on insurance alone so that would be the equivalent of 2,600 car sharing minutes($1,000/{$0.38 cents/minute}) before I broke even on just insurance.

I pretty much refuse to get into a regular cab these days since the drivers are usually so rude, won’t accept credit card and in general just aren’t very good at their job.  But with the emergence of companies like Lyft and Uber, I’m in love with taking taxis now.  The rates are very reasonable and the cars are clean, the drivers are nice and they give out a ton of free money when you sign up!

If you’re on a tight budget, then this might be your best and only option.  Since I’ve been on a work hiatus for the past two months, I’ve been biking nearly everywhere and I’ve really enjoyed it.  I’ve saved a ton of money on gas and it’s also great exercise.  Everyone thinks that biking takes much longer than driving but for distances under 10-15 miles it’s pretty comparable.  I can average 15-17 mph on my hybrid bike and I never have to worry about parking.  You might get a little sweaty though so there’s that.

All of the above methods are great for shorter distances, but if I didn’t have a car I would have to rent one to go on trips or be able to visit my family in LA.  Renting a car is pretty expensive so this would really be a last ditch option.

Ultimately, I don’t think it’s feasible for a single person living in Southern California to ditch their car quite yet but I do think it’s possible for two people to share one car in today’s environment.  If your partner or spouse is into the idea then it might be a viable option to ditch one of your cars.  The monetary savings would be huge and you might be surprised at how easy it is to get around without a car.

Readers, what do you think about my plan to get rid of my car?  My new job is about 20 miles away so it will be pretty tough to bike to work but I could car share or pay someone to carpool with them.  If I can’t get rid of my car this year, when do you think I’ll be able to? 1-2 years, 3-5 years, or more?