With almost half of Millennial households burden by some form of debt, many Millennials are likely to face the challenges of debt repayment with their spouse. However, disagreements about money is one of the top reasons couples get divorced, and debt is a huge part of this equation. This begs the question: is it wise to marry someone in debt?

While we can’t choose who we fall in love with, you can determine how you want to approach your partner’s debt. Kara from The Frugal Feminista did that exact thing when she refused to marry her (now) husband until he tackled his debt.

When thinking about building a future together, it’s important to take debt considerations into the equation. After all, a spouse entering a marriage with debt can place burdens on you as a family. Here are some things about debt to keep in mind and discuss with your future spouse. 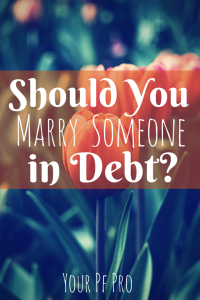 According to the Pew Research Center, about four-in-ten U.S. households headed by an adult younger than 40 currently have some student debt—the highest share on record, with the median outstanding student debt load standing at about $13,000. With numbers like this, it’s likely this topic will come up while dating or early in your marriage, especially if one or both of you want to pursue higher education.

On one hand, student debt typically signifies that you’ve graduated with a college degree (or beyond), which means you likely will earn more than someone without a college degree. While beneficial in the long term, it may not appear that way when you’re paying $500 or more a month in student loan debt.

To clear up one misconception: student loan debt is not both spouse’s responsibility. The spouse who took out the loans is the only one responsible for this debt, so if your spouse were to die, his or her loans wouldn’t follow you (unless they refinanced and you cosigned, of course).

If you or your spouse received loans through the federal government, there are many programs to help you pay off this debt burden reasonably over a number of years. Private lenders can be more difficult, but there are options to refinance for a lower rate or simply call up your lender and see if they can work to reduce your payments.

Consumer debt is different from student loan debt, and it can speak volumes about how your spouse handles his or her money. Did your spouse get into consumer debt because they fell on hard times and couldn’t pay bills, or does your spouse expect a certain standard of living they can’t afford on their current salary?

Much like student loan debt, consumer debt can place significant burdens on you as a family. If your spouse isn’t diligent about paying off their debt, high interest rates, particularly on credit card debt, can eat into your family’s ability to save.

Also keep in mind when this debt was accumulated: if the consumer debt was obtained during your marriage, you may be responsible for it if your spouse passes away or you get divorced.

However, if you’re familiar with Kara’s story, she only married her husband after they came up with a plan to tackle his debt. Married already or not, it’s important to sit down together and discuss your plans for handling debt.

Here are some additional debt considerations you’ll want to approach as a couple:

Marrying someone with debt doesn’t mean you two are destined to live meager lives forever. Depending on the size of your debt, you both may have to be more frugal or work harder to pay off your debt. By discussing issues like debt early in your marriage, or before you get married, you’ll both have a solid foundation for tackling issues – big and small – in the future.