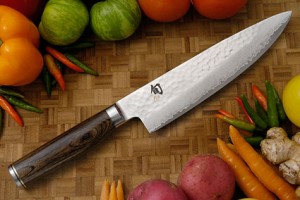 If you’ve ever been around someone who loves to cook, you’re probably already familiar with the names Shun or Wusthof. They are two of the top knife-manufacturers in the world and most professional chefs carry one or the other. These knives may be top of the line, but so is their price tag. Most knives in this elite category can cost you upwards of $150(for a single knife, if you find a good deal). Meanwhile, you can get a solid set of knives for around $30(I purchased this set 3 years ago).

I also bought a Shun 8″ Chef’s knife at the same time for around $150 plus tax. But compared to my generic set, the difference in quality has been astounding. I cook on average around two times a week, so I’m not using my knife every day, but it’s amazing how much sharper this knife is. I actually feel like I’ve gotten pretty spoiled since I started using this knife and now I won’t chop with anything other than my Shun.

One Knife vs. 5 Sets of Knives

I paid around $150 for my Shun knife two years ago and around the same time I also bought the Ginsu set of knives referred to above. The set included: an 8-inch chef’s knife, an 8-inch slicer, a 7-inch santoku knife, a 5-1/2-inch boning knife, a 5-inch utility knife, a 3-1/2-inch paring knife, and six 4-1/2-inch steak knives, plus a pair of shears. Now the only knives I really use out of that set are the steak knives and the slicer(bread knife) because I use my Shun for almost everything else.

I contemplated buying the Shun for a while because like I said, you can literally buy five sets of knives for the price of one. However, I’ve been happy with my choice because the blade on my Shun is like no other. I was actually pretty nervous about using it for the first couple months because I didn’t want to cut my finger off, that’s how sharp it is.

It’s hard to say if the quality of the knife is 5 times better than my knives set but it’s close. I just had my Shun sharpened for the first time and it looks and feels like a brand new knife. I still use my other set all the time but they’re getting close to the point where I may have to throw them out soon. I think it’s best to get an expensive all purpose knife like a Shun or Wusthof because you don’t need the highest quality when you’re cutting bread or slicing into a juicy steak.

Maintenance of a Shun Knife

I had absolutely no idea how to take care of my knife when I bought it and I didn’t know anyone with a Shun, so I did most of my research online. Here’s what I learned about my Shun:

After about 6 months of using my Shun, I noticed that it had lost a little bit of its sharpness. I could no longer cut through a ripe tomato with minimal effort so I knew it was time to get it sharpened. Here’s where I made my first mistake. I bought an electric sharpener from Shun for $30 and sharpened the knife myself. It helped a little bit but it definitely didn’t bring it back to its original state. I later talked to some experts and they told me how bad this was for my knife. Apparently, there is a whole art to sharpening that an electric sharpener will never achieve.

My options were a little limited though because I was too cheap to send it in for sharpening. I had a couple chips in the blade and they charged per inch of sharpening so I think it would have come out to around $20 plus shipping both ways for sharpening. But luckily, they brought back their free sharpening service this year so I sent it in. I think the free sharpening service makes the knife a much better investment. Now that I’ve got it back and I’m using it again, it’s just like brand new. They somehow got rid of the chips in the blade and restored it to its original state.

Overall, I really love my Shun knife and I think using it in combination with a cheap set of steak knives has worked well. So what type of knife or knives do you have in the kitchen? Do you think it’s worth it to get a top of the line knife and if so how do you keep it sharp?