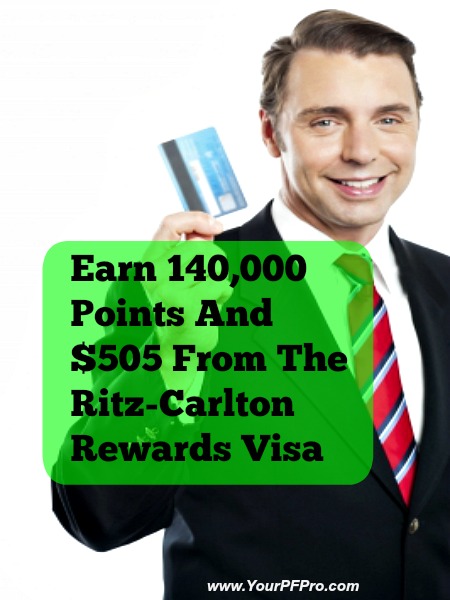 I wrote about The Ritz-Carlton Rewards Visa a few months ago and the day that I posted my article was the same day that that deal died.  Yes I am that lucky.  But as One Mile At A Time reported the other day, that deal is now back on and if you apply right now, it could be better than ever!

If you want a quick history lesson on this card, I suggest you go read my initial post on this card (I even shot a cool unboxing video that’s been viewed over 1,000 times!).  But the gist of it is, this card will give you 140,000 points and a $300 airline credit per calendar year for a $395 annual fee.  There are some other benefits but since I don’t ever stay at Ritz-Carlton hotels they don’t mean much to me (The Lounge Club access is pretty cool but I already get access through all my Ink cards).

You might be thinking that no card is worth that kind of annual fee but I would gladly pay $395 for 140,000 points and here’s why.  Once you rack up 270,000 points, you can redeem them for a Marriott travel package that will get you 7 nights at a Cat 1-5 Marriott and 110,000 Southwest points that count towards companion status.

Ignoring the hotel rooms completely, that’s $1,600+ in Southwest Wanna Get Away fares and if you bring your companion along, that’s $3,200 worth of flights!  So if you and your wife were to apply for this card, you’d pay $790 in annual fees and get up to $3,200 in Southwest flights  plus 7 nights at any Marriott around the world.

Let’s Make This Deal Even Sweeter

That is already a pretty good deal but Ritz-Carlton has made this deal even sweeter since they also throw in a $300 airline credit per calendar year.  That means each and every calendar year you get to reimburse $300 worth of things like upgrade fees, in flight dining/entertainment, lounge access, global entry, etc.  Now I don’t really spend money on those things ever but since most airline purchases are all coded the same way, it’s up to you to call in and tell Ritz Carlton what your purchase was for.

Not every purchase will work, but I’ve  had success getting Delta e-gift certificates reimbursed (I bought in increments of $50, $110, $110 to make it seem like they were lounge passes and/or upgrades).  And I was also able to get the taxes/fees covered on our upcoming British Airways/Aer Lingus flight from Boston to Dublin.  I just played dumb with the RC agent and asked if the reimbursement would work on upgrades since I bought award tickets and then paid to upgrade.  They bought it 🙂

At this point, you’re paying $395 for $600 worth of airline incidentals and 140,000 points.  But if you apply right now, before the end of the year and are able to spend $300 on airline incidentals, you’ll actually be able to get 3 calendar years of incidentals instead of just two.  Since Chase actually gives you 2 months from the time your annual fee hits to cancel the card and receive a full refund, if you applied today, you would be able to get $900 worth of airline reimbursements and only pay one $395 annual fee.

Here’s the link to sign-up for the card (not an affiliate link): https://www.theritzcarltonrewardscard.com/offer140k

140,000 Points From The Ritz-Carlton Rewards Card From Chase & Unboxing Video