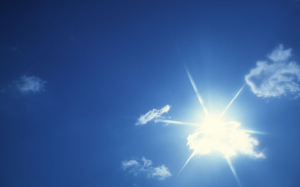 My parents discovered that I was blind as a bat when I was in kindergarten. I was an exceptional reader so they were always asking me to read things in books and magazines but one day they pointed to a street sign and as the story goes, I couldn’t see anything! I don’t really remember that story but one thing I do know is that to this day, I still can’t see. I’m extremely nearsighted and I also have astigmatisms in both eyes. If natural selection could have had its way, I would have walked off a cliff a long time ago.

Thankfully though, contacts were invented(I don’t even see very well with glasses since my prescription is so high) and the rest is history. I started wearing hard lenses in 6th grade and haven’t looked back since. Now a days, wearing contacts is like second nature to me and I can wear them all day without a problem. Once a year I’ll drop by my optometrist’s office and get an eye exam and a new prescription.

Since my vision is so bad I have to get special lenses for astigmatism that cost a lot of money compared to regular lenses. I get free VSP insurance from work but VSP is one of the dumbest types of insurance out there. Everyone who needs contacts or glasses is going to insure themselves and everyone who doesn’t won’t. So basically you’re just paying a 3rd party(VSP) for the privilege of paying an optometrist.

Optometrists might not make as much as the average doctor but they’re still doing pretty well. I don’t know the exact revenue breakdown but they don’t charge much for eye exams and fittings so they can’t be making much off that portion of their business. Instead, they make most of their money off selling frames and contacts since that’s where the real mark up is. Even though you can get frames and contacts online, a lot of people still pay for them in store due to the convenience factor. And as I’ve noticed lately, there’s a lot of pressure from the staff at my optometrist to buy lenses with them.

I’m not a sucker so I would never buy contact lenses from an optometrist but most VSP plans offer an allowance every year towards contact lenses. My plan gets me a $20 co-pay on the exam, a 15% discount on the lens fitting and a $120 allowance towards contacts. So most of the time I pay the co-pay and the discounted exam price, spend the rest of the allowance on however many boxes of contacts I can get and then buy the rest of my contacts online. Like I said, my contacts are pretty expensive and my optometrist charges $60 a box for them(3 month supply for one eye) so that means I can only get 2 boxes(3 month supply for both eyes) with my $120 allowance.

Taking Advantage of the Out of Network Allowance

This year I did a little research and figured out that my plan(and almost all other ones too) allows you to use that $120 allowance on in network OR out of network providers. So instead of buying contacts with my optometrist, all I paid for was the co-pay and the discounted exam price and went straight to the internet. I found the exact same box of contacts online from Vision Direct for $28/box including, tax fees and shipping so I bought a year’s worth of contacts from them and sent in the reimbursement form through VSP.

It was a little awkward at the optometrist’s office since they are really pushing you to buy contacts with them. At first, they were trying to get me to buy a whole year’s supply with them. Then they told me I might as well just buy two boxes right now since it would be free(after my $120 VSP allowance). Obviously they’re not going to tell customers that that $120 can also be used with online providers who are way cheaper so it’s up to you to figure that part out.  I ended up just telling them I wanted to double check the price I could get online to see if I should order a year’s supply with the optometrist or not.  They bought it…

Adding up all the Savings

At the end of the day, my total order was $223.93 for 8 boxes of contacts(I used the code NEW25VISION for a nice 25% discount). I also used a cash back site called uPromise and that got me 9% cash back($20.15) on my purchase. Since I used my AA Executive card that also got me back about 1 cent per dollar spent($2.24). Plus Vision Direct has this promotion with Drugstore.com and that got me 5% back($11.20) in Drugstore.com dollars.  And finally I applied my $120 out of network allowable to the balance and I ended up only paying $70.34.

But wait, there was one more discount that I forgot to include.

HSA to the Rescue

Most people use the triple tax savings of an HSA to pay for big medical expenses like doctor visits and medication. But since I’ve been blessed with great health up to this point in my life, the only time I really use my HSA is to pay for vision related services(contacts, solution, exams). Since I paid for that $223.93 contact lens bill with my credit card, I can save the receipt and withdraw that money from my HSA at any point in the future. So if you take my marginal federal tax bracket(15% since I’m getting married!) and add it to FICA/Medicare(7.65%) I saved 22.65% on my taxes($50.72).

Readers, what do you think about all the ways I went through to save money on contacts? Did you know that most VSP plans allow you to spend your contacts or glasses allowance at an out of network provider? Do you ever feel pressured at the optometrist’s office to buy lenses and glasses from them?

If you sign up for uPromise, I get a small referral fee so it’s a great way to support the site!