With the start of the new year, I’ll be back to posting regularly two times a week on Mondays and Thursdays.  Today, I have the pleasure of bringing you a guest post from reader Bichon Frise.  I’ve known BF for a while and we’ve exchanged some good tips back and forth via e-mail and now he’s agreed to contribute every month or so as a guest poster. 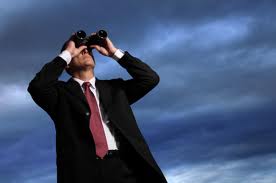 “There are lies, damn lies and statistics.”  Samuel Longhorne Clemens popularized this quote, and there is some truth to it.  I contend, however, that statistics aren’t worse than lies, but rather the average person doesn’t really understand statistics.  Ironic tidbit of this article, I sailed through math classes my entire life (even completing 2 years of calculus in high school), but statistics is the one math class that ever gave me any trouble.  So, here I am, talking about Statistics.

Just to be sure we are all on the same page about what an average is, we’ll run through a quick example.  I live on a street with 11 houses.  My street also has 12 children living with their parent(s).  So, the average number of children per house on my street is 1.09 (12 children/11 houses).  Of course, you can’t have 1/11th of a child and in reality, only 5 of the 11 houses have children living with them.  So here you begin to see one of the inherent problems of using the average to understand a range of outcomes.  And it is problems like the average 1.09 children/house that lives on my street which can lead us to less than average results.  Using the average to make decisions or as a “yardstick” in our personal financial lives, on average, will lead to disappointing results.

I find that many of today’s youth have a hard time finding what they “want to do.”  Regardless of one’s path to what I consider to be an evil profession, many land on the decision of becoming a lawyer.  Law school is only 3 years, and somehow most prospective lawyers know a lawyer (because they’re a dime a dozen) who they perceive to be “rich.”  A pseudo-savvy potential law student looks up potential starting salaries and finds the average to be about $80k.  Being more realistic than smart, the potential law student thinks, “I probably won’t be the best in my whimsical law class, but I will certainly be better than average” (while true, that may not be saying much).  So, our potential law student thinks s/he can score at least, probably a bit more than, $80k coming out of law school.  Not too shabby, because teaching English to middle schoolers is only going to pay $35k.

The fact of the matter is, virtually no law student will make $80k out of school, or anything that really resembles it.  There are very few jobs where a law student starts out making $80k—so how did we get here?  The distribution of law students’ starting salaries is bi-modal (2 hills and one valley).  The average is skewed by law students who score one of the few $150k/yr jobs (most likely in a high cost of living city like NYC or San Francisco or DC).  So, what’s everyone else making?  $45k – $50k. 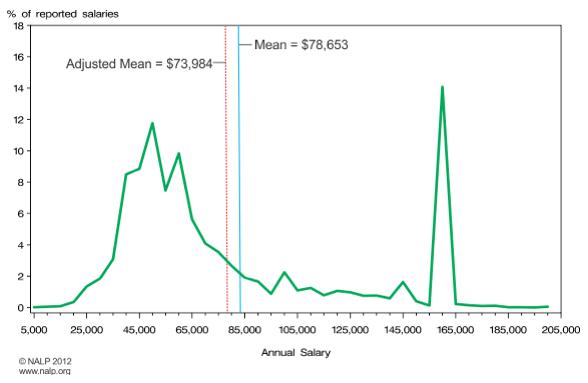 Many years ago, I began researching the question, “How much retirement savings should I have saved for my age?”  My findings were: it is very hard to find information on this.  But, the Employee Benefit Research Institute (EBRI) publishes a retirement confidence survey once a year.  In that study, it is found on average, workers 25-34 have less than $10,000 saved/invested.  Again, we shouldn’t assume because we are average or above average that we are doing ok. Adjusted for today’s dollars, my personal networth before age 30 was over $600k—I came from neither a rich family or married a rich family, but my savings came from hard work, sacrifice and a bit of luck.  Even with amassing more wealth than 99% of my peers, and probably a good portion of the global population as a whole, I was nervous (and still am) about not having saved enough.

Most interesting from the EBRI is that all age groups, except age 55+, and all workers taken as a whole average less than $10k in savings/investments.  Many people reading this article know better, but we shouldn’t use these average saving/investment numbers as a yardstick.  Being average or having $10k in savings, in this case, is suboptimal, regardless of your age.

One final example, and one we all know too well (and unfortunately, some of us more than others).  7 or 8 years ago the talk was, just buy a home and the home’s value will increase, on average, 3%/year.  I’m sure we all, unless you are super young, have heard some sort of talk along these lines.  It may still, in fact, be very true—on average a homeowner will yield a 3%/year (or pick your poison) increase.  But, the path to that 3% can mean many different things.  As Case-Shiller reported back in the day, it was a straight line with an approximate 3% increase. In fact, Case-Shiller’s model wouldn’t accept negative return numbers, pre-housing bubble popping.  But, we all know, especially those who bought 7 or 8 years ago, that the path to an average 3%/year increase in a home’s value is far from a straight line.

Being average, on average, will not lead you to where you want to be.  The number is interesting to discuss, but just as our lawyer friends will learn, it can be terribly misleading.  To combat being led down the wrong path, we should look at the entire distribution (which would benefit our lawyer friends) and/or we should do our own analysis to see if being average gets us to where we want to be (no credit card debt is best, any credit card debt is horrible).