The following article is a guest post by Justin Gordon.  If interested in submitting a guest post, please ready my guest posting policy and then contact me..  Justin is a recent graduate of Temple University School of Law and majored in Political Science at USC. 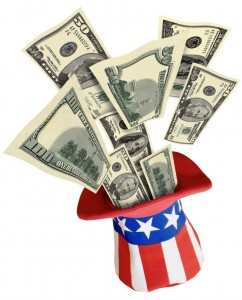 The United States’ federal income tax policy is a beast; it’s no wonder why so many Americans, even educated ones, have no idea how the system works (“My accountant handles it”). The following is a brief description of how it works and one common sense reform that would bring billions in sorely-needed revenue to the government.

The way pundits on Fox News cry about taxes being 50-60%, you would think we were in France. We’re not.  Not even close. America has a progressive income tax system, which means that an individual’s tax rate increases as his/her taxable base rises.

During the Clinton years, the highest tax bracket was 39.6%. Bush came into office and signed huge tax breaks into law. Tax cuts might seem like a nice thing in theory. But when the country has two wars to pay for, rising healthcare costs, a crumbling infrastructure, a baby boomer generation that will soon need Social Security and Medicare to retire with dignity, something has to give. The real question—the answer to which supplies a stark contrast between Romney and Obama—is whether we want to balance the budget on the backs of the middle class and the elderly (Romney’s plan), or require the richest among us (top 2%) to pay more (Obama’s and Clinton’s plan).

The system of deductions and itemization is another complex aspect of our tax code. A deduction is quite different from a tax credit: a deduction reduces a taxpayer’s income from which he/she can be taxed, while a credit is a dollar-for-dollar reduction of the taxes one owes to the government (thus, a tax credit is worth a lot more). Essentially, there are two types of taxpayers: those who take the “standard deduction” and those who “itemize” their deductions. You can’t choose both (but if you don’t choose one, Uncle Sam will greatly appreciate it). The standard deduction for unmarried taxpayers is currently $5,800; married couples filing jointly may deduct $11,600. If you take the standard deduction route, you may deduct that amount ($5,800 or $11,600) from your adjusted gross income to determine what bracket you’re in, and hence, the amount of taxes you owe. On the other hand, it may be wiser to “itemize” your deductions in any given taxable year if, for example, you own a home (and pay a mortgage), pay state/local taxes, have high medical expenses, and/or make charitable donations. This is because the dollar amount of such expenses may exceed the standard deduction, and would thus allow the taxpayer to show a lower income for tax purposes.

On top of changing the tax bracket percentages, both campaigns are proposing to make reforms to some of the current deductions for itemizers. To be fair, neither campaign has provided a great deal of information on which reforms it will seek (likely because it will anger various constituencies). Romney has been less forthcoming, so much so that even Fox News has become impatient.

Reforming the system of deductions will affect the government’s revenue by billions of dollars. Basically, the government is subsidizing certain taxpayer expenses. Why? In the case of allowing deductions for mortgage interest on your principal residence, the idea is to incentivize people to become homeowners. Allowing deductions for charitable donations is supposed to encourage goodwill (turns out that a warm, fuzzy feeling sometimes isn’t enough). All of these subsidies come with a fat price tag. The deduction for home mortgage interest, which millions of itemizers take advantage of each year, costs the U.S. Treasury approximately $484 Billion. Deductions for state and local taxes cost the Treasury $237 Billion. Deductions for charitable donations will cost the government $315.1 Billion from 2011-2015. Many economists and tax policy experts find various deductions to be horribly inefficient and unfair.

A Floor For Deductions

To reduce the impact of deductions on the Treasury, the concept of a “floor” has been introduced in some circumstances. For example, in order to utilize the medical expense deduction, a taxpayer must first reach a 7.5% floor, or threshold. If the taxpayer has an adjusted gross income of 100K, he/she must have paid more than 7.5K (7.5% of 100K) in medical expenses in that year before he/she can use that deduction. The government does not subsidize the first $7,500, but will subsidize the amount above. To be clear, you still have to pay for the medical bills; the benefit is that you don’t have to pay tax on the income you received that went toward paying those medical bills.

The Deduction For Charitable Contributions

The U.S. Government permits deductions—up to 50% of an individual’s adjusted gross income—for gifts made to educational and medical institutions, churches, and certain publicly supported organizations. Economists have generally found that the “dollar efficiency” of the deduction is high. Hence, deductions incentivize donations, and most studies conclude that the dollar gain to the charitable organization equals, and even sometimes exceeds, the dollar loss to the Treasury. Despite the fact that studies have shown that charitable donations are responsive to changes in marginal tax rates, is the immense cost of the current deduction justifiable?

One policy change to reduce the cost to the Treasury (i.e. $315 Billion from 2011-2015), while retaining the incentive for charitable giving, would be to implement a floor like the one just described for medical expense deductions. For instance, Congress should make charitable donations deductible only to the extent that they exceed a certain floor (i.e. 3% of a taxpayer’s adjusted gross income). Such a change would not affect incentives to donate because of the structure of a floor. If we assume that Taxpayer (“T”) has an adjusted gross income of 100K, is subject to a marginal tax rate of 25%, and typically makes 10K in donations each year, under the new policy, T would be allowed a deduction of only 7K instead of 10K. The 3K that T was previously permitted to deduct would now be taxed, while the charities would still receive the full amount.

Here’s a real life example, from the recently released 2011 tax returns of Mitt Romney. Romney had a taxable income of $13,696,951 and donated $4,020,772 to charity in that year. Three percent of $13,696,951 is $410,908.53. If Congress had enacted a measly 3% floor for charitable donations, the Treasury would have been able to collect taxes(35%) on that money, while the amount he donated would have stayed the same. By allowing the current deduction of up to 50% of one’s adjusted gross income, without ANY floor, the U.S. Government is providing enormous (and unnecessary) hand-outs to the wealthy. Romney should follow his own advice and advocate against such “entitlements.”

If we can maintain the charitable incentive while increasing funds for necessary government programs and paying off our nation’s debt, then I think a charitable deduction floor is a common sense policy proposal that most people, liberal and conservative, can agree on.