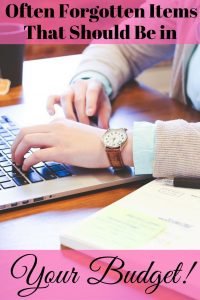 As the first month of the new year draws to a close it is likely many people have already revised their budgets. If you are among them, it’s important to note that making changes to it doesn’t mean your budgeting is complete for the year.

In fact, you should review your budget at least every couple of months if not each month. In doing so you may find that you have forgotten items that should be in your budget.

One of the often forgotten items that should be in your budget each month is a computer upgrade. Granted, computer prices generally decrease as technology improves making them more affordable all the time.

However, even replacing a computer every couple of years will still require a chunk of change. Shelling out several hundred dollars all at once may not be an option if your budget is tight.

If your computer dies suddenly, though, you may have to do just that if you’re desperate. But there are better ways to pay for it than to pull out plastic and charge it. Instead, why not make it a line item in your monthly budget?

Take a look at computers online that are similar to what you may want. Then figure an average cost by adding all of their prices together and dividing by how many computers there are.

Next take that figure and divide by how many months you think it will be before you need to replace it. The resulting figure is an estimate of how much you need to set aside each month for your purchase.

Would you like to get control of your spending and budget accurately? Then you must not only watch for sales that can reduce what you spend but also budget completely. That means adding forgotten items that should be in your budget currently.

Your cell phone may be one of the items you don’t budget for but should. One reason is because prices can range from under a hundred dollars to over one thousand. That’s a pretty large gap.

Regardless, the smart phones of today undergo heavy use requiring you to upgrade every few years. To absorb the costs of upgrades, create a place for them in your budget each month.

A couple of weeks ago, my 13 year-old oven decided it was ready for retirement. At the time, I was cooking something in the oven while writing at the kitchen table.

I saw a bright flash out of the corner of my eye and heard a loud “pop” making me pause in my work. Warily, I got up and walked over to check it out. That’s when I found my oven was no more.

So, after a failed attempt by my husband to fix, it a few weeks, and thirtyish dollars later– don’t judge because he is usually quite good at this sort of thing – we ended up buying a new oven.

Luckily, we had enough money set aside to afford spending several hundred dollars on a new appliance. But not everyone is in a good enough financial situation to be able to simply go out and buy another one on the spur of the moment.

If you are one of the unfortunate ones, don’t use your credit card to pay for replacement appliances. There are better ways to handle your debt. As an alternative, estimate what you believe you’d spend and add it to your budget.

Obviously a new car is a major expense for anyone. Therefore, getting a new or nearly new one requires budgeting. Nevertheless, applying some of the same methods as above, you should be able to come up with a budgeting figure.

Don’t forget to include increased costs of insurance, tags, and taxes when you budget.

It’s true that budgets must be reviewed and evaluated fairly often to make them accurate. But they should also be looked over to ensure there are no forgotten items that didn’t get included.

What other forgotten items do you think should be in a budget?