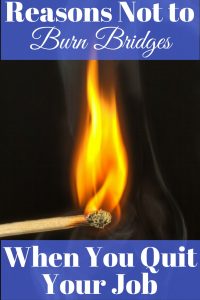 Recently, a former co-worker of mine quit her job. While she didn’t flip her finger when she left, she did make it known that she hadn’t been happy while employed there.

The town I live in has a population of just over 5,000 and, as a result, jobs are sometimes hard to find. My employer, however, is one of the larger ones in our small town. Consequently, there is always a remote possibility that she may re-apply for a position there in the future.

But the problem is that I am not at all sure she would be hired back if she did. Her situation got me thinking about how different it was when I was rehired a couple of years ago.

You see, I worked for the same employer once before. In fact, I ran the department that I now work in. The difference for me is that I left under different circumstances.

Had I have been surly or lashed out in any way I am certain I would not have been considered for re-employment. I was lucky that I didn’t. There are reasons not to burn bridges when you quit your job.

Several years ago when I left the hospital where I now work again I wasn’t happy either. Being in management isn’t all great pay, authority, and power over others. For me it was hard work, long hours, and not much appreciation.

Of course, that is expected when you are in a position of management. I knew that before I was first hired because it hadn’t been my first management roll.

After a while, though, I got burnt out. Additionally, I was tired of missing out on so much of my kid’s lives and school activities. That was what motivated me to put in my notice.

Like my friend who recently quit, my coworkers and staff at the time knew I wasn’t happy when I left. Despite my discontent, I left my management job with as much dignity and respectfulness as I could muster.

Because my town is small I knew I would see my former work family again. The two part-time jobs I held during the gap ensured I continued having contact with them. Community events and shopping at local stores also contributed.

But since I didn’t act out or verbally berate anyone when I left the first time my reputation was intact and I had the full-time job I needed. In addition, I had no problem getting those two part job jobs in between either.

2. Possibility of Being Rehired

Another one of the reasons not to burn bridges when you quit your job is the possibility of being rehired. For example, my current employer hired me back with little reservation.

My story would no doubt have been much different if I had gotten confrontational when I left the hospital the first time. Sure, I was frustrated by work conflicts just like anyone else.

However, it’s always best not to say or do anything in the heat of the moment that you might regret later. Think things over carefully before you burn bridges and prepare ahead of time when you quit your own job.

Ours is the information age and networking is as important as ever. Furthermore, in a small town, word travels like wildfire. Any juicy gossip or tidbit of information is known by nearly everyone in our community within 24 hours of it happening.

Obviously not everyone works in a small town like mine. Regardless, information still travels and keeping up appearances is important.

When you burn bridges as you leave a job, though, you risk ruining your chances at future employment even in a city. Word gets around within the business world if you leave in flagrant style.

The problem is that you never know when your reputation precedes you. You may apply for a job somewhere with a former competitor and be turned down.

If you were to ask why you may find out information you almost don’t want to know. It’s because the prospective employer heard about your final dramatic performance from your former employer.

Rather than risk your future employment possibilities, don’t burn your bridges when you quit your job. Telling off your boss might feel good in the moment, but it could cost you another job if you do.

Instead, plan your exit carefully. Look over your benefits package and turn in your notice to maximize them the most. Whatever you do, don’t burn bridges when you quit your job.

Have you ever burned bridges when you quit a job? Did you regret it later?