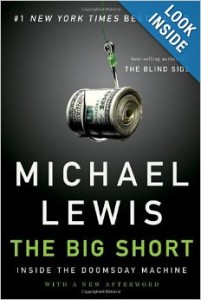 Before I read The Big Short by Michael Lewis, I had no idea what credit default swaps and collateralalized debt obligations(CDO’s) were. But Lewis does a great job explaining what went on during the years leading up to the subprime mortgage crisis and where it all went wrong. I always knew that the economy got royally f’d by the housing market in 2007-2008 but I never really knew why until reading this book.  I was in college during 2004-2009 and the economy was really the least of my worries during that time.

The Big Short follows the stories of several Wall Street outsiders who bet against the housing market using credit default swaps and ended up making hundreds of millions of dollars. It was refreshing to read a non-fiction book that used personal histories and interviews to play out one of the biggest financial crises of the past 100 years. Michael Lewis is best known for his non-fiction sports writing(The Blind Side and Moneyball) but his first best seller was also written from the perspective of a financial insider and was titled Liar’s Poker.

What the Hell is a Credit Default Swap?

I went in to the book thinking it would be more of a dry historical type novel but I was pleasantly surprised. There’s not really a main character but the book instead follows a group of traders around as they learn about CDO’s and credit default swaps and try to figure out a way to short subprime mortgages. For the complexity of the topic, Lewis does a great job explaining what these little known financial instruments are and how they work. In fact, he constantly points out that most of the people involved in the business at the time didn’t even know how these things really worked.

One of my rules of investing is: only invest in that which you know and understand. Yet these Wall Street traders and CEO’s made billion dollar bets on instruments like CDO’s that turned out to be some of the most complex financial pieces of crap we’ve ever seen. They were more concerned with the short term profits that bundling up these mortgages and selling insurance on them provided than figuring out how they worked and what the long term effect would be.

For those who don’t know, essentially what caused the crisis was a rash of unqualified borrowers taking out adjustable loans way beyond their means with the inability to ever pay them back. The guys in the book who shorted the housing market saw this fact early on and figured out a way to bet against it using a credit default swap. A credit default swap is basically like insurance that paid them if the CDO’s(basically mortgage bonds) defaulted. The craziest part about credit default swaps is that you didn’t even need to own the asset in question in order to buy insurance against it. That would be like if you saw a fire approaching your neighbor’s home, you quickly went out and bought insurance on it and once it burned down, you collected your money.

There was a lot of blame to go around for the subprime mortgage crisis but ultimately the main cause was greed. Homeowners who took out way more than they should have. Banks and lenders who loaned the money to increase their profits. Wall Street who kept the demand high for new loans from the banks and lenders and profited the most out of anyone. And the government/rating agencies who basically had a thumb up their ass the whole time.

The book follows a few stories but my favorite character is a guy named Michael Burry. Burry was a Stanford trained neurosurgeon turned hedge fund(very small one) manager with Asberger’s syndrome. He’s also one of the first guys to realize that the teaser rates homebuyers were offered would end in two years and that’s when the defaults would start to happen. He knew that the securities(CDO’s) formed by these shaky mortgages would start to go bad and so he bought as much insurance(CDS) against the CDO’s as he could.

While waiting for the loans to default, Burry faces immense pressure from his investors since his fund is losing money(due to the insurance premiums) while the S&P is going the other way. Even though Burry’s fund had returned 200% higher than the S&P the two years before he started making these bets, at the first sign of trouble, his investors started to revolt. Ultimately, he was proven correct and made hundreds of millions of dollars for his clients but almost none of them ever said so much as thanks. This part of the book was sad because it only illustrated how greedy Burry’s investors were: when times were good they didn’t give him so much as a pat on the back but when times were bad, they all wanted to pull their money out.

Greed vs Stupidity: Who Wins?

The book was a little depressing in the sense that everyone on Wall Street got rich. The people who were making the trades got rich, the people facilitating the trades got rich and even the banks that lost money were eventually bailed out by the US government. Personally, I don’t think the government should have stepped in because it only promotes bad behavior. The biggest losers were probably the every day people like you and I who actually took out the mortgages. Although homebuyers share some of the blame, they were definitely the ones most taken advantage of.

The one takeaway that relates to me on a personal level is that the markets are wildly unpredictable. Reading the book, it seems so obvious that we were headed for record high mortgage defaults yet only a handful of people were able to predict it. Everyone from the Wall Street Banks to homeowners to government rating agencies had no idea that this avalanche was coming.

I talk to people on a daily basis who tell me about their latest hot stock or some new investing fad. For some unknown reason, they think they can predict a market that is wildly irrational and unpredictable. If the best of the best when it comes to investment professionals did not see one of the most obvious financial bubbles in the history of the modern market why would some idiot walking down the street think he can predict where interest rates are going to go or what the housing market is going to do?

Sometimes it’s ok to admit you can’t predict the future. I look at empirical evidence and data when it comes to my investments. In other words, I do the math: if the math makes sense, then it’s a good investment. Investing on a hunch or investing based off emotion isn’t investing, it’s gambling. You can go to Vegas for that.

Readers, what do you think about The Big Short and the subprime mortgage crisis in general? This book was actually very easy to read and was also a great resource to learn about what went on during that time. If you’re looking for a non-fiction book packed full of drama, comedy and knowledge I suggest you give it a try.

Editor’s Note: If you’re an Amazon Prime Member, you can actually rent this book for free through the Kindle Library. If you’re not a member yet, sign up for a free 30 day trial and get started.  Btw, I also get a small referral free if you buy anything from Amazon using one of my links so happy shopping.