I’ve been using Turbo Tax to file my taxes for several years now so I thought it would be appropriate to review their product.  Last year, I debated over whether or not to hire a CPA but ultimately decided on using Turbo Tax again.  Although my taxes have gotten more complicated over the years, I’ve always been a big do-it-yourselfer(see: cheap) so naturally I hate the idea of paying someone to do my taxes.

My W2 income is pretty standard(even with itemized deductions) but the main reason why I considered hiring a CPA was due to the fact that I’m an independent contractor for my second job.  But since that income was less than $10,000, I didn’t think it would be worth it to hire a CPA.  I ended up consulting a friend in the tax business who helped me out with my business deductions.

Which Version Should You Get?

Turbo Tax offers their product in two forms: CD/Downloadable or Online Version.  Both products are similar but the online version is completely free until you file.  It’s also kind of neat being able to save all your documents online and work on your return from wherever you want.  Seeing as how everything is going on the cloud these days, I would recommend the online version.

From there, it gets a little trickier as Turbo Tax offers several different options based on your filing status and tax situation.  I think picking the correct option is probably the toughest part but here’s a rundown straight from Turbo Tax’s website: 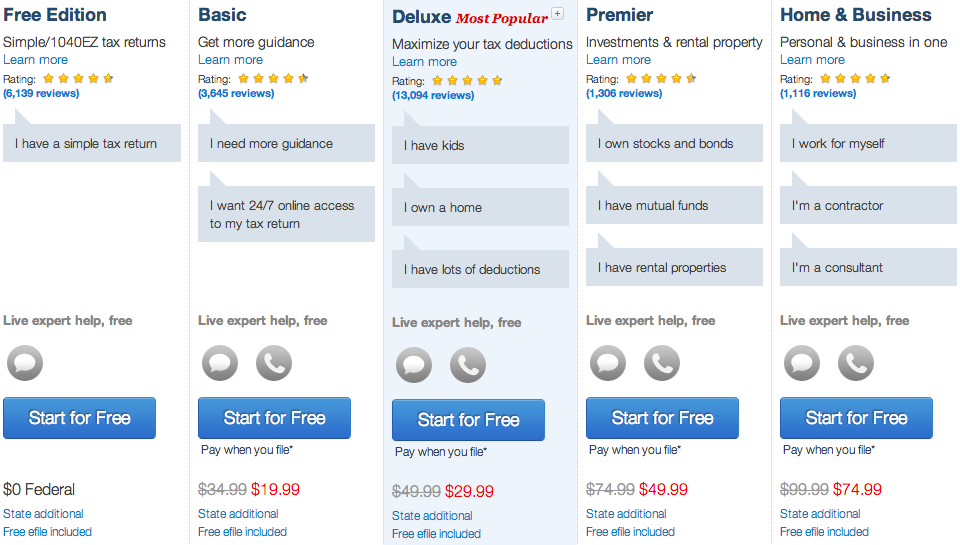 I chose the Home & Business version since I technically own my own business for my second job.  But most people should be just fine with the deluxe edition.  The premier version gives you everything the deluxe has plus a little extra help with the investments and rental properties side.

Worth The Cost(or Lack of Cost)?

The prices listed above do not reflect the cost for state e-file which is $36.99.  I think the price of Turbo Tax is relatively fair and although I know there are some cheaper options available, you often get what you pay for.  Turbo Tax basically guides you through the whole process and makes it pretty tough to make a mistake.  Even if you itemize, there are cool features like the charitable deductions wizard that allows you to enter the items you donated and it gives you the value you can deduct.

If you’re looking for more face to face interaction, then tax software is probably not for you.  Although Turbo Tax does a great job guiding you through the process, you still have to do most of the work.  I like their customer support options though, since you can get help from live online chat, by phone or on their online forums.

If you’re on the fence about trying it out, you’re in luck since there’s no risk with the online software.  You can complete your entire tax form and you won’t have to pay a single cent until you actually file.  It might also be a good way to check up on the work of your CPA or other service that you may be using.  If you end up getting a nice return, go do whatever you want with it: spend it, save it in your bank account or use it.

I don’t have too much negative to say about Turbo Tax since I’ve been using it for so many years.  But there are certain situations in which you need to be careful about your return.  I almost made a mistake when it came to my employer stock purchase plan since my discount amount was reported as income on my W2 and my 1099 from Fidelity reported the same amount as a capital gain.  I had to go in and manually correct the amount paid on my 1099 from Fidelity otherwise I would have paid income tax plus capital gains tax.  It’s situations like these that you need to be careful of when going with tax software.

If you’d like to sign up with Turbo Tax, do so below(affiliate link) or just enter to win my giveaway!

Readers, have you ever used a tax software like Turbo Tax?  Or do you prefer face to face contact with a CPA or tax professional?  Or is there another option I’ve never even heard of?