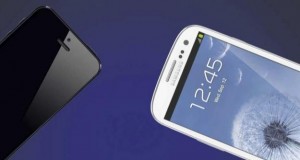 I’ve had an iPhone for the past four years, but the other day I finally decided to switch to the Android OS and get a Galaxy S3.  I was pretty disappointed with the iPhone 5 release, essentially the same phone as the iPhone 4, but slightly taller and skinnier.  So far, I really love my S3, the Android operating system is much more customizable and the phone has a lot of cool widgets and functions.  Whether you decide on the new iPhone, the Galaxy S3 or some other smartphone, upgrading can be a pain(and expensive).  I’ll tell you how I got the best price with the least hassle.

I did a lot of comparison shopping and ended up buying my phone at Best Buy for $50 less than it would have cost me at the AT&T store.  When I first started shopping around, I never would have guessed that Best Buy would have the cheapest price!  But in the end, they gave me the best deal and helped me transfer over all of my contacts, music and photos for free.

Although the list price of most new smartphones is $200, the actual MSRP is close to $500-$600.   The reason why you only have to pay $200 is that the phone carrier(in this instance AT&T) will subsidize the difference.  Since you’re agreeing to stay with them for two more years when you upgrade, they take the $400 hit here to lock you in at $100/month for two more years.

Smartphones are pretty common these days, and although there are still some people still using flip phones, I think it’s only a matter of time before every phone is a smartphone.  Even if you don’t use it to browse the internet or go on Facebook, things like maps(driving directions) and e-mail are pretty invaluable.  It’s been about 4 years since I had to print out driving directions from Mapquest(is that site even still around?)  Now I can just look up my destination on my way out the door.

I, like most people, assumed that my carrier(AT&T) would have the lowest prices on this phone.  After all, they are the ones subsidizing the cost of the phone, and they have a direct relationship with the manufacturer.  But in reality, they actually had the highest prices.  If you’re looking for a new smartphone, make sure to compare prices with stores like Amazon Wireless, Best Buy, Costco, Target and Walmart.  I’m not sure why these stores have lower prices, but they always seem to beat the carrier’s prices.

I actually found the lowest price on Amazon Wireless, my phone

was only $120, but they wouldn’t allow me to keep my unlimited data plan.  When I called Amazon Wireless customer service, they told me that AT&T was not allowing anyone to upgrade without dropping their unlimited data plans to a standard 3 gb per month plan, through a third party vendor.  I didn’t run into this problem though at Best Buy so your results may vary.

Unfortunately, you are required to pay taxes on the full MSRP of the phone so instead of paying taxes on $200, I had to pay taxes on $550.  This seems a little shady to me, but there’s not much you can do about it.  If you live in a state where Amazon doesn’t charge sales tax, you should be able to upgrade your phone through them and avoid this tax.

The other PITA charge is the $36 activation fee.  Now this one really pisses me off, but again, there’s not a whole lot you can do.  I don’t know why AT&T doesn’t just charge more for the phone, and not hit us with this back-end fee.  How hard can it be to activate a phone?  You press a couple buttons, and the computers do the rest, I don’t see how on earth it could possibly cost this much.  It kind of reminds me of the fee ticketmaster charges you when you want to print out tickets, what the hell?

However, I did find one way around this fee.  If you work for a large company, chances are they have discount arrangements in place with the major cell carriers: AT&T, Verizon, Sprint and T-Mobile.  Most corporate discount plans will waive this activation fee and give you a discount of up to 25% on your bill.  My company actually offers a 25% discount and will waive activation fees on new phones.  Since I’m still on my family plan(and only paying $50/month for my smartphone), the bill is under my mom’s name but she also receives a similar discount through her employer so there were no activation fees.

I ended up buying my phone at Best Buy because they had the phone I wanted, in stock and at the lowest price.  The upgrade was relatively painless and I had my new smartphone ready to use within 45 minutes.  My final cost was $150 for the phone plus $50 in taxes.  I even saved an additional $20 by using my Amex card!

Readers, have you upgraded your smartphone recently?  Did you buy your phone straight from the manufacturer, the carrier or a third party store?  Is it worth it to upgrade?