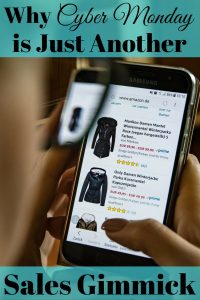 According to Wikipedia, Cyber Monday has only been around for about 12 years. But since its inception, retail sales have grown into the billions.

Cyber Monday deals are usually offered only on products consumers buy online. But do we really need another reason to spend money whether we spend it online or in the store?

Retailers seem to think so. However, I am going to tell you why Cyber Monday is just another sales gimmick that you should avoid.

1. It Plays on Your FOMO

Many people know that Black Friday plays on the consumer’s fear of missing out, or FOMO. This is demonstrated by the lengths people go in order to “win” the good deals that are of limited quantity.

I believe Cyber Monday is just as bad if not worse than Black Friday when it comes to FOMO. People who missed the sales from the Friday before may feel pressured. If they don’t buy what they can the following Monday, Cyber Monday, they could miss out on something.

Because Black Friday advertisements start going out around Halloween now, shoppers assume they can get the best prices from that point on until Christmas.

Not true. The best prices to be had are advertised later on as it gets closer to the holiday. December is actually when the prices are generally at their lowest. Of course, there is also a risk of the item no longer being available if it was a hot seller.

However, the more often and longer retailers can get customers to look at their products the more they will sell. It seems it’s just how we are wired – susceptible to their ploys.

3. It Plays On Your Mood

What consumers don’t recognize is how Cyber Monday plays on their mood. Once they start buying things they get hooked into buying even more.

For example, while browsing online for one thing they find five more. By the time they check out they’ve purchased more than they meant to purchase.

But they will never again get it at such a terrific price so it was worth it, right? At least, that is what they are told by the retailers who lure them into overspending.

What actually happens is that the customer feels good about what they bought and spent so they immediately go buy more. To put it more accurately, they go on a buying streak.

The fact of the matter is that Cyber Monday is just another sales gimmick designed to trick shoppers into spending.

Why do the retailers do this? Because when customers shop sales it leads to them making even more purchases, including things that aren’t on sale. The top selling stores know this and use it against us.

Spending when you think you are saving is another way Cyber Monday is just another sales gimmick.

Let’s take for example the shopper who buys a fancy $500 purse for $150 dollars during a Cyber Monday sale. She got that purse for less than half price so she saved a ton of money, right?

Wrong. If she needed a new purse she could have spent under $50 at a discount store like Target instead.

The moral of this little story is that consumers should buy only what they need to buy. Then, shoppers should invest the rest, or at least as much as possible. That is how to really save money.

5. It Pulls in Millennials Shoppers

As I said before, Cyber Monday is a huge day for online shopping. It may have even surpassed Black Friday’s online sales and it’s only been a thing for a little over a decade.

One reason for its success is because the bargains are as good as or better than those of Black Friday, but only last for a short period of time. This entices shoppers to spend their money quickly before all the good deals are gone.

Another possible explanation is because they don’t have to fight the crowds by shopping online instead.

All of these seemingly positive aspects appeal to consumers and millennials in particular. These tactics pull in millennials and get them to part with more of their money.

Millennials alone are not to blame for their vulnerability. Everyone spends money they shouldn’t because retailers know how to pull all of us in. They use every trick in the book. That is why Cyber Monday is just another sales gimmick.

Clearly, consumers overspend on Cyber Monday in the name of saving as much as they can. But I believe recognizing that we do is the first step in the process of ending that cycle of behavior.

Do you overspend on Cyber Monday? If so, why do you feel compelled to spend more than you should?