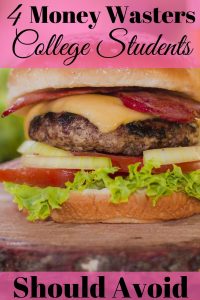 When I attended college, I ended up with a very small student loan when I graduated. Thinking back I believe it was just under $3K.

But that was quite a few years ago. I’m sure if I had gone more recently I would have had student loans for several times that amount.

These days the costs of attending college are higher than ever. In fact it’s become a less and less affordable option for many. Some high school graduates are even opting to move straight into the work force and skip college altogether.

Of course, plenty of people still attend college and many end up in serious debt as a result. However, some of that debt might be prevented if college students were more careful with their money. To help with that, here are some money wasters college students should avoid.

While some colleges have strict rules and require certain students to live on campus, not all do. If students don’t have to live in the college dorms, it might be cheaper to live elsewhere.

They should check the price of college dorms against the cost of rent somewhere else. Additionally, they keep in mind that their living space doesn’t have to be a palace because it’s temporary. When they’re done in a few years, who will care what the place looked like or if the curtains matched?

Sharing housing expenses with a few friends would lower their costs. Keeping their “stuff” at a minimum can also allow more people to share a house or apartment. That will make their housing costs more affordable.

There’s more than one way to keep high priced tuition from being a money waster. Here are a few that might help out.

Don’t Go Out of State

Out of state tuition costs can be double, or more, of what students would pay within their own state. Therefore, this is one of the money wasters college students should avoid if they can. Instead, they should attend college in their own state (clearly this doesn’t apply to students who are attending college on a full scholarship).

Some high schools offer dual enrollment. This lets their students begin taking college courses a few years earlier than they normally would. Also, these credits can often be earned at a lower cost than they would usually pay.

Spreading these classes over a longer period of time is another cost savings when going to college. This can make college a little more affordable for many people.

College students should avoid wasting money on high tuition costs by attending a community college first. Courses taken at these colleges are usually more economical. Students may even be able to get half, or more, of their credits completed for far less money.

It makes sense that when college students leave home they want to go out and enjoy themselves sometimes. But the more parties and social events they attend, or host, the more it costs.

Keeping these events to one or two a month can help them avoid overspending and wasting money. The rest of the time they should try alternative entertainment that is cheap or free.

Fast food and restaurant meals can kill a budget fast. They are definitely some of the money wasters to avoid in college.

Does that mean students should never eat out at all? Of course not. Indulging a few times a month is ok. The rest of the time college attendees should fix meals themselves, if they can.

When it comes to eating on campus, those costs can be just as much as restaurant food. Unless it’s unavoidable, college students should avoid paying for pricey meal plans.

Certainly when students go to college they should have fun while learning. That doesn’t mean they should have to pay for it for the rest of their lives, though. That’s why it’s critical for them to avoid these, and other, money wasters while in college.

What are some other money wasters college students should avoid?