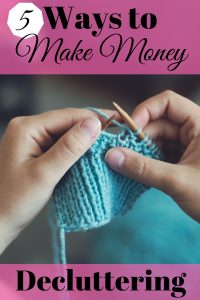 Having a tight budget makes it difficult to pay for any extras that come up. Of course, those extras can come in many forms.

They could be unexpected expenses, such as car repairs or appliance issues (I recently had the ice maker in my refrigerator repaired). Or, they could be bills you knew were coming, such as higher electricity costs from the onset of cold weather.

No matter what causes budget increases, you have to find a way to cover them. That means either making cuts in other areas of your budget, or finding ways to make more money.

I recently found an approach to help my finances not everyone would think of. I’m decluttering so I can get rid of things I don’t use while paying for extras in my budget. During the process I’ve found that there is more than one way to make money by decluttering your home.

About six weeks ago, when the cool whether hit my hometown, I began thinking about fall home improvement and decorating.  Digging through my autumn decorations led to the discovery that there were items I needed to part with.

Once I finished setting up my display of pumpkins, leaves, and other fun items I began thinking ahead toward Christmas. Naturally, I’ve begun to go through those items as well.

The result of my efforts is a collection of things gathered in an unused bedroom in our basement. I plan on posting them later today on our local buy/sell/trade Facebook page to make money quickly. If they sell, I’ll make money decluttering to use for the Christmas gifts I have yet to buy.

While decorating my home for fall, I remembered an item I’d bought but hadn’t yet come across. It wasn’t in my fall décor storage box, so I started hunting for it. Searching around the house, I discovered I’d put it aside in my crafting room.

But, when I looked in that room, I found other things I’d purchased and set aside. I’d intended to use them to make additional fall decorations. So, I gathered them, along with anything else I needed, rolled up my sleeves, and got to work. Now, new items grace the buffet in my living/dining room as well as a table at my mother’s home.

If I had wanted to, I probably could have quickly sold my crafts either locally or online at a profit. It would have been another way to make money decluttering.

Bartering and trading are practices that have been used for hundreds, if not thousands, of years. They help people get rid of their own excess while gaining things they need but don’t have.

Trading with other people is also a way to make money through decluttering. If you have something another person wants bad enough, you might be able to trade up in value.

The new thing you trade for could then be sold or traded again to increase your value farther. Do this enough times and, once you sell the final item, you could make a bundle. If you think it can’t be done, consider the man who traded a paper clip for a house.

Sometimes when you’re cleaning out, you find large, expensive items you really aren’t using that much. Another way to make money decluttering those items is to rent them to other people.

For instance, we once rented an enclosed trailer to a friend who wanted to move their family member. It cost them much less than going through a traditional company, such as U-Haul.  At the same time, it added a little more money to our budget.

While this idea may not seem like a way to make money decluttering, it sort of is. Through my own decluttering efforts I have run across things I’ve set aside that could save me time and money.

As an example, a few months ago I found a kitchen gadget I’d forgotten about in a little used drawer. I could have decluttered it, but using it myself removed it from the category of clutter. In a sense, I decluttered it.

The way I used it to make money was through time savings. It helped me create freezer meals at a much faster pace by setting up an assembly line while cooking. I used the extra time to do freelance writing and virtual assistant work, therefore, increasing my income.

Certainly, lots of people have extra expenses now and then, whether they’re expected or unexpected. However, you can use these ways to make money decluttering to help cover yours.

What extra expenses have you had lately and how did you cover them?