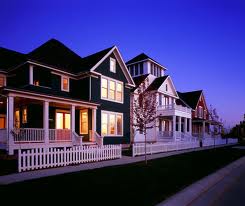 A year ago I refinanced to a 3.75% 7/1 ARM with Quicken Loans and my experience with them was fantastic. I bought my property almost three years ago and that refinance lowered my payment by $200 a month. I was definitely content, but as I watched rates drop further, I started to think about doing another no cost refinance. I did a ton of research, and eventually decided to go with Amerisave. They offered the lowest rate by an eight of a point and told me that I would actually receive a $300 credit that could be applied to my escrow prepayments.

I love no cost refinancing because with the no cost option, there is no floor for the buyer. Every time rates go lower, you can just refinance again. Although a traditional refinance can still save you money, you’ll have to calculate the breakeven point between the upfront costs and the monthly savings.

Amerisave is a very large and reputable online only refinance company. Since they have no physical presence, they are able to offer some of the lowest rates around. They do a ton of advertising online, and there is probably even an Amerisave ad on the sidebar right now. My overall review of Amerisave is positive but there were a couple major hiccups along the way. From start to finish, it took 3 months, but I was able to lower my payment by $75.

I applied on 4/25 and was pre-qualified that same day. The application was pretty straightforward and I had to provide all the necessary documents like W-2, bank statements, etc via e-mail and/or fax. At the time, my credit scores were 747, 764 & 782 so I was able to lock a 3.125% 7/1 ARM with a lender credit of $2,006 and fees of around $1,700. As of today, I don’t see an ARM option with a lender credit greater greater than fees available on their website. But, they are constantly updating their programs, rates and terms so I would keep checking if a no cost option isn’t currently available for your situation.

Single family homes tend to get the best rates, so make sure you enter all you information correctly. There are some state restrictions and they don’t serve all areas but their main requirement is an LTV of 80% or better. I knew I would be well below this so I wasn’t too worried about the appraisal but I would be careful here if your house is close to 80%. You have to pay for the appraisal yourself and it’s credited once the loan closes, so you may lose out on the $400 fee if your home doesn’t appraise at 80% or better.

I faxed in my disclosures on 5/2 and my file went into underwriting on 5/7. One great feature about Amerisave is their website. You can log in at any time and check on the status of your application. Your account will tell you if an appraisal has been ordered, when underwriting is complete, etc. I really liked this feature because I didn’t have to constantly e-mail my processor for a status update.

My file was conditionally approved shortly thereafter but there were a couple minor things that I had to explain and send back in. My loan processor was very good about keeping me in the loop up to this point.

On 5/16, I e-mailed my loan processor to check on the status of my loan and she told me everything was on track except for a small problem with my h06/interiors insurance covering replacement cost. Now if you don’t own a condo, h06 insurance basically covers everything from the drywall in in a condo. The HOA’s master policy covers the building and all the structures surrounding it, but your H06 insurance will cover everything from counters and fixtures to your personal belongings.

For the next month and a half, I went back and forth with my loan processor and insurance company discussing this issue. At first, I wasn’t very involved and for two weeks my loan processor kept telling me there was an issue with the insurance company and not to worry because it would be resolved. After a few weeks of patiently waiting, I contacted my insurance company and they told me the same thing. At this point, I was almost two months into the process which in my opinion is way too damn long! But since this was a refinance and I was in no rush to close, I stayed patient.

I did not have this issue with Quicken, and apparently Amerisave has a strange requirement for condos only that says your H06 policy must specifically state it will cover the replacement cost. I have absolutely no idea why they have this policy because as I explained that’s what H06 insurance is! It covers the replacement cost of everything in your unit should the building burn down for example. Either way, I was too far along in the process to quit now so beware of this strange requirement if you own a condo(in California) and decide to refinance with Amerisave.

On 7/2 I was starting to get pissed. My loan processor and insurance company were not getting it done. I called a friend who I had recommended Amerisave too and she had encountered the same problem and had to switch insurance companies. That same day, I called State Farm and got a quote with them that was actually $200 less. I noticed in the quote there was a mention of replacement cost coverage and that was all it took.  Within 3 days, my file was sent to final approval!

I’ll take some of the blame here since if I would have switched insurance companies I could have saved myself two months of lower payments. But I do think this is a bizarre requirement by Amerisave. Either way, it shows the importance of comparing quotes. I was being lazy by not getting a few insurance quotes at this point anyways, and it ended up saving me $200 a year.

Closing was finally here. A mobile notary came to my work and I signed all the documents and wired money to the escrow company. My payment was about $2,400 which covered first month’s interest and my escrow prepayments. I received a payment from my old loan servicer about a month after closing that made up most of this amount. After all was said and done, I did receive a little less than the $300 credit I was promised after all the fees, payments and credits were added up.  Although, there was a nice little surprise waiting for me when Amerisave sold my loan to Citi Mortgage. Citi pulled my credit without me approving! I think there is a provision that says they can do this but it kind of took me by surprise and I was not happy about it.

My experience with Amerisave was a good one but mainly because of the fact that they lowered my monthly payment by $75. Their customer service was good throughout the whole process and my loan processor was very good about getting back to me, even if she didn’t have the answers I wanted to hear. Their application process is very efficient and you can literally lock your rate within hours of applying. I like the fact that you can go to their site, enter in your information and that is the rate you can lock. There are no hidden fees or surprises other than the ones I already mentioned.

If Amerisave can give you the best rate, I’d say go for it. My refinance took longer than I wanted, but I really wasn’t in a rush. I’d be careful using them for a purchase, but for a no cost refinance they offer the best rates around.

Readers, what about you?  Do you own a property with an LTV of 80% or better, have you considered a no cost refinance?  Rates are still pretty low, and personally I don’t think they’re going anywhere for a while.