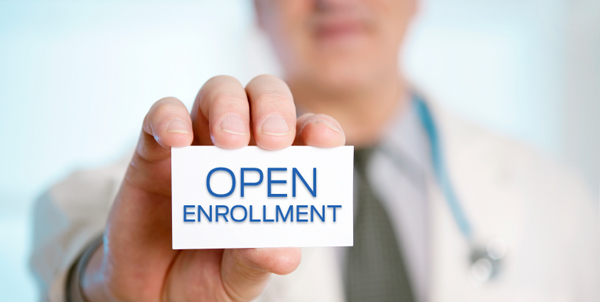 As most of you know, a health savings account or HSA is one of my favorite investment vehicles of all time.  It’s the only investment that allows for triple tax savings – the money you put in isn’t taxed, the money you take out isn’t taxed and the earnings aren’t taxed – as long as you spend the money on qualified medical expenses.  If you’re the perfect specimen of health by the time you retire, you can withdraw the funds in your HSA just like you would with a normal 401(k) or traditional IRA.

I would argue that HSA’s should be maxed out as soon as you’ve contributed enough to get your 401(k) company match since they can be invested just like regular retirement accounts.  There’s really no risk to over-contributing either since your HSA acts like a regular pre-tax retirement account for non-medical expenses.

I’m obviously all for HSA’s but there are still many who are too stuck in their ways to see the light.  I know it’s hard to make changes if you’re comfortable or happy with what you currently have.  But in order to succeed in business or even life in general, you need to be open and willing to look at new things and embrace change.

I’m going to use my employer’s plan as an example but you can apply the same comparison techniques that I use below to determine if an HSA is right for you or not.  Spoiler alert: it probably is.

My new company has over 170,000 employees so it makes sense that they offer the HSA/HDHP option to employees.  In fact, they’re pushing it pretty hard since it probably saves them a ton of money.  I’ve read articles in the company magazine, gotten e-mails from HR, and there’s even a special section on our website that talks about all the great benefits of the HSA/HDHP option.

In exchange for signing up for the HSA, my company offers an employer contribution to the HSA and reduced premiums.  They will give $600 to anyone willing to sign up for the HSA/HDHP plan and the premium is $0/month.  My last employer only gave $500 and had a monthly premium of $26 for the HSA option so I’ll take the extra $100 and the reduced premiums.  If I  go for the traditional medical plan with my new company, the monthly premium would be $21/month.

Here’s a brief summary of how the two plans compare: 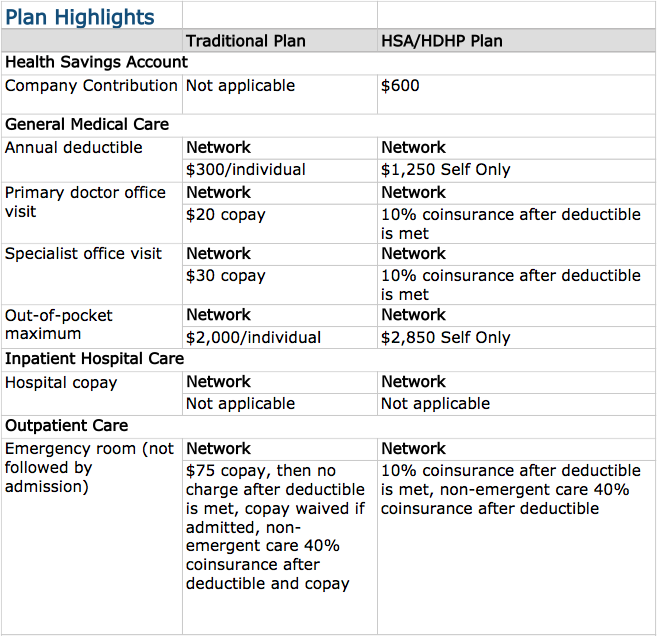 As you can see, the main differences between the two plans are the premiums, deductibles, out of pocket maximums and the co-pays vs co-insurance for things like office visits.  So let’s take a look at the plans and see which option makes the most sense

At my last employer, the deductible was $3,000!  My new company generously gives us a $1,250 deductible which is actually the lowest amount allowed by law.  Any lower of a deductible and the plan would not qualify to be paired with an HSA.

The traditional plan comes with a $300 deductible but you have to remember that co-pays generally do not count towards deductible.  So just based on the deductible and premiums alone, the HSA is a no brainer.

Keep in mind that with the traditional plan, you would still have a $300 deductible.  With that plan, office visits and specialist visits are generally covered with a co-pay but once you require an x-ray or additional testing, you will have to pay for everything up until the deductible.  Once you reach the deductible, you would pay co-insurance up to your out of pocket maximum.

Here’s an example of how my employer’s traditional plan would work.

Let’s say your shoulder has been hurting so you go to your primary care doctor for a visit.  You would pay a $20 co-pay for the visit but that doesn’t cover any additional treatment.  If he orders an x-ray, there is 10% co-insurance after the deductible is met.  So you will have to pay for the full cost of the x-ray which very well could be $300 the way diagnostic tests are priced these days and then you would pay co-insurance for anything after your deductible.

As you can see from this example, once you hit your deductible you’ll still have to pay, but you’re basically getting a 90% discount since your co-insurance is only 10%.

If the same thing happened but you had the HSA/HDHP combo you would have to pay for the full cost of the office visit(probably in the $100-$150 range) and you would pay the same price for the x-ray(assuming it was less than $300).  So you’d be paying more for the visit but remember that you got $1,146 free so you haven’t actually spent a dime yet.

It might seem like a pretty good deal to only have to pay $20 every time you want to see the doctor but you’re paying for that privilege with a much higher premium.  Not only do you have to pay $21 more per paycheck but your employer is probably paying hundreds more on your behalf too.  And if your employer’s medical costs are going up, it will definitely be reflected in your lower salary or lack of bonus.

Choosing the HSA over the traditional plan will give you $1,146 in free money.  Since you can also contribute money to an HSA on a pre-tax basis, every dollar you spend after $1,146 on medical care will be tax free.  That could mean that you’re receiving a 20-50% discount on your healthcare depending on your income since these contributions would be coming out of your marginal tax bracket.

Out of Pocket Maximum

Two of the things that scare people away from HSA’s are the high deductibles and out of pocket maximums.  I’ve already shown that the deductible favors the HSA and now I’m going to show the same thing for the OOP Maximum.

Since we’re getting $1,146 in free money, if there was a catastrophic event and you racked up tens of thousands in hospital bills you would only be on the hook for a total of $2,850 with the HSA/HDHP option.  Since we get $1,146 free, that would leave us to cover the rest: $1,704.  Compare that number to the out of pocket maximum for the traditional plan($2,000) and you could actually be on the hook for more money going with the traditional plan.  Not to mention that the $1,704 would be tax free while the $2,000 would have to be paid with after tax dollars(if your medical expenses are greater than 7.5% of your AGI, then they would be tax deductible for traditional plan holders).

Clear Winner is the HSA

I think the clear winner here is the HSA/HDHP option.  Normally HSA’s make sense if you’re young and healthy, but here it would probably work out in your benefit 90% of the time.  I really lucked out this year, my company offers a great health plan and with the HSA, I’ll be able to save a thousand dollars a year, plus contribute another couple thousand.

Since the deductible and OOP max are so low, I’m able to get the same tax deferred savings but with way less risk(my last plan had a 5k OOP max!).

Readers, what do you think about my new company’s HSA plan?  Why would anyone sign up for a traditional plan here when the HSA is so clearly incentivized?