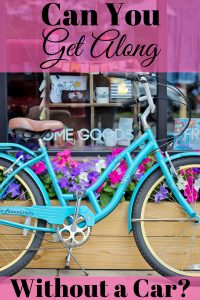 For many young people, one of the keys to independence is getting their first car. It’s not only kind of a rite of passage, it’s also a step toward adulthood.

I can still remember getting my first car. It was handed down to me from my brother when he upgraded to a newer (although still used) one.

While I could have probably gotten along without it for another year or two, eventually I’d have needed wheels anyway. Where I live, to get to anywhere you’ve got to have some form of transportation other than your two feet.

Of course, not everyone lives in a rural area like I do. That means there may be other ways to get around. So, can you get along without a car?

Ways to Get Around

As mentioned above, there are other ways you could get around, depending on where you live. For instance, you could walk instead. Alternatively, you could also take a bus, ride a bicycle, carpool, take a taxi, use an Uber, take a train, or use the subway.

Clearly, there are lots of alternatives to driving in order to get where you want to go. But, there are both advantages and disadvantages of each choice.

You probably can get along without a car, but a major advantage of having a car is that it’s convenient. Since you own it you can use it whenever you want. You can also go pretty much wherever you want.

Accessories can also be added, like seat covers, steering wheel covers, fancy wheels, and more. If you want to change the outside appearance, you can do that as well.

Did you ever consider that with a car you can make money too? Using your car you can drive for Uber or Lyft and earn money to offset car costs or other things.

Obviously there are also advantages to using your own power to get around. You don’t have to pay for gas money, for one thing. For another, you get exercise which is good for you.

Using a bicycle is another way you can get along without a car. Once again, it provides good exercise.

Another advantage is that they are not too expensive. They hold up well over time, if taken care of properly. That means you can also pick them up used for less money increasing your savings over owning a car.

Carpooling will only help you get along without a car if you pay a friend to take you everywhere. While that may be convenient and less expensive for you, it may not last.

Above I mentioned several other methods of transportation you could choose over a car. They include taking a bus, taxi, train, or subway to get to your destination.

While at the onset they are cheaper than buying your own car, some can add up over time if used frequently.

A couple of methods of travel I didn’t mention until now are motorcycles and mopeds. Certainly they are cheaper than owning and maintaining a car.

There are disadvantages to having a car as well as advantages. If you drive far, you will have to fill up with gas more frequently. They can also be expensive to buy as well as maintain. In addition, you’ll need a place to park it when you’re not driving it.

The bad thing about walking as your mode of transportation is that it takes longer to get anywhere. You also can’t easily transport very much, like groceries or other large items.

If the weather is bad while you are walking you may get cold or wet. When it’s hot out, walking can be equally miserable.

As with walking, a disadvantage of using a bicycle is not being able to carry much. You can add baskets or other accessories that allow you to transport small items. But what and how much you can carry will be limited.

Weather is just as much an issue when bicycling as it is with walking. When it comes to maintenance, you will need to air tires and replace them now and then. Your bicycle may also need to be washed, lubed, and have brake pads replaced as well as other routine care.

Without a car of your own, paying someone else to drive you probably isn’t a lasting option. They will tire of it after a while and then you’ll have to figure out another way to get around.

Taking public transportation everywhere may be cheaper than buying a car, but it isn’t as convenient. You’ll still have to pay and you’ll probably have to wait to be picked up or transported. Moving large items remains an issue you’ll have to deal with through delivery services or other means.

If motorcycles or mopeds are your choice of transport, you’ll want to use extra caution and a helmet. They aren’t going to be as safe as using a car. Additionally, you’ll still have the same problem of not being able to haul very much.

I could go on and on about the different methods of transportation and their good and bad points. But each person’s needs and viewpoints are different. Obviously where you live and how far you routinely travel must be considered.

Having a car does grant independence as well as convenience and other advantages. Obviously it comes at a price. But you must ultimately weigh all of the factors, not just what is mentioned here. Then, decide if you can get along without a car or not.

Have you thought about giving up your car and getting along without it?