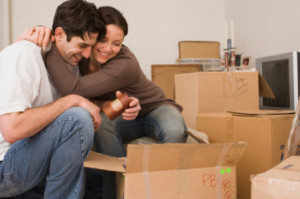 Whether it’s after a few months or a few years, after a certain point in every relationship you’ll probably consider moving in together.  It’s a natural progression in most couples’ relationship and at this point, you’ll have to weigh the positives and negatives.  You will save on gas driving to each other’s houses, save on food cooking together, save on utilities, etc.  Financially, it sounds like a great move but is it the best thing for your relationship?

20 years ago it was somewhat uncommon to move in with your significant other before marriage, but today things have changed.  I have friends who’ve moved in with their girlfriend after just a few months!

There are definitely some drawbacks to moving in with your partner but I think financially it’s a very smart move. So before you make a decision and hire movers you may want to think of a pros and cons list for moving in together.

Living by yourself is expensive but you can immediately cut your rent in half by living with another person.  It also affords you the option to upgrade to a nicer place since generally there isn’t a linear correlation between rent and square footage.  The cost per sq. ft tends to go down as you get a bigger place(ie a 1 bedroom 1000 sq ft will rent for $1,000 while a 2 bedroom 1500 sq ft may rent for only $1,300).

The deal gets even sweeter if you own your own place since you essentially become your girlfriend’s landlord.  Before I got engaged, I didn’t really have any problem charging my girlfriend rent since she used to pay $900/month when she lived with friends and now she only pays a little more than half that.  Although you’re legally required to pay taxes on that money, there are some pretty easy ways to get around it like having her pay for utilities and groceries instead of rent or having her pay a couple bills for you.  E-mail me if you have any questions 🙂

Rent or mortgage might be one of the most tangible savings but I think shared expenses is a close second.  Utilities like electricity, heat, internet and cable actually become more cost-efficient as the number of people using them goes up.  Unless you’re both downloading gigantic movie files at all hours of the day, these services won’t even be affected by another person.

One of my biggest budget items is groceries($300/month).  I like cooking big dinners and making extravagant lunches so I tend to spend a lot of money on food every month.  With two people in cohabitation, it allows me to cook all the same food but with less waste.  It’s a lot easier to make four servings than one.  That way, we each get a dinner and lunch or we can have leftovers for dinner the next night.  We both make some tasty food so the leftovers are always pretty good.

No matter how much money you make, the one thing that will always be the same for you is the number of hours in a day.  Living with someone else can save you time since the number of chores stay the same, but the number of able bodies has doubled.  We generally take turns cooking dinner so that gives me a couple free nights a week where I can do whatever I want.  It’s also nice to trade off chores like taking out the trash, running the dishwasher and vacuuming.

Moving in together to save money probably isn’t the best reason to do so, but it should definitely be a part of the decision.  If you end up breaking up, things could get pretty awkward but I don’t think it will affect your wallet too much.  For renters, make sure to sign a lease that gives you the option to go month to month after the lease is up.  If things go awry before your one year lease is up, the worst thing that could happen is one of you will have to move out and one will remain behind.

It’s definitely harder to break up with someone once you’re living together.  I may be in the minority, but I actually like living with my fiancee.  It might be a different story if we had a smaller place but we have a nice setup with an office(when I’m using it)/crafts room(when she’s using it).

So as you can see, I’m all for moving in with your partner.  I think it makes a ton of sense in general and it’s nice that there are a bunch of financial benefits too.

Readers, how have your cohabitation experiences been?  Were the financial savings there or did you encounter more problems than it was worth?