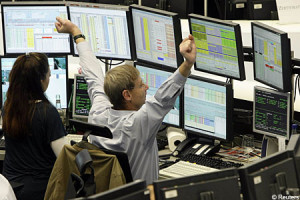 Is This Guy Yawning or Celebrating?

Even though I generally recommend investing in index funds and low cost mutual funds, from time to time I do trade individual stocks.  Don’t get me wrong, I usually end up losing money, but I never invest more than 1 or 2% of my total net worth in one stock and the total value of my current trading account is less than 5% of my net worth.

Ok enough with the disclaimers, we all know investing in individual stocks is dangerous, yet we still do it.  Whether you hear a hot stock tip at the bar or you know a guy who knows a guy who’s got some good insider information, it’s too tempting to sit on the sidelines while everyone else is cashing in.  We all hear stories from friends about how they bought a stock at $2 and two months later it was at $50.  Wow, doesn’t that sound great?  Unfortunately, the stock market is a zero sum game so for every winner there is also a loser.

We all like to think we’re smarter than we actually are and picking individual stocks is a good way to prove it.  Unfortunately, it’s human nature to forget most of your bad picks and only remember the good ones.  If you’ve never traded individual stocks, you’re not missing out on anything but you can read a quick start guide and find everything you’ll need to know.

Since I work in the aerospace industry I usually have a pretty good beat on what’s going on.  And in the past decade, it seems like nearly every major airline was losing money or going bankrupt.  At the end of the day though, these companies end up merging and no one really goes out of business in the aerospace industry.  So when I saw American Airlines was bankrupt and their stock price was at a lowly 37 cents, I knew there was no way in hell they were going out of business.  That was all it took, I plopped in $738 and bought 2,000 shares based solely on my hunch.  Today it’s at $2.52 so I’ve made a nice profit, now I just need to decide when/how much to sell.

You guys probably think I’m a genius after that last trade right?  Unfortunately my last three major trades before this did not work out too well.  I’ll highlight only the most recent though, a $2,000 purchase of a Chinese solar company called Yingli(YGE).  I actually got the tip from a guy in a bar back home and he was adamant that the stock would be doubling very soon.  I think I talked to him for at least an hour about China, solar power, etc and I was hooked.  I bought it the next Monday and lost about a $1,000 before I eventually sold it off.  Good job me.

Should I Keep Investing In Individual Stocks?

Anyone who’s had success investing in individual stocks probably thinks it’s a great idea and anyone who hasn’t probably thinks the diametric opposite.  I think there are worse things you could be doing with your money and it probably isn’t that harmful to invest less than 5% of your net worth in individual stocks.  If anything, it will remind you how difficult it is to pick winners and that way you won’t be tempted to make those same mistakes in your retirement and after tax accounts.

Remember, there are people who pick individual stocks for a living.  They research companies thoroughly, look at P/E ratios(do you know what that is?), and comb through financial documents.  And even they can’t consistently pick winners!

Readers, do you think it’s ok to pick individual stocks?  If yes, do you do it to have fun, make money or some other reason?  If no, why not?