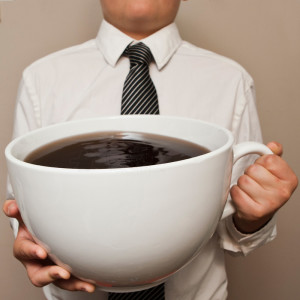 There was a time where I actually didn’t like the taste of coffee.  I would drink a frappucino every once in a while, but let’s be honest those things taste more like a milkshake than actual coffee.  But times have changed, and one of the reasons why I now like coffee is because I actually enjoy the taste.  I usually add a tiny bit of creamer or a small amount of milk but that’s about it.  I’m not sure how much of a pick me up it gives me but mentally the caffeine definitely helps.

You’ve probably read the truism over and over that if you cut out that $5 cup of coffee you could end up with $100,000 in retirement or some absurd amount like that.  I’ve never cared about the little things when it comes to personal finance, but I do care about the big things like starting multiple sources of income or figuring out the asset allocation that will determine 90% of your investment returns.  Coffee isn’t one of the big things but it’s still an expense that nearly every American has to deal with.

Generally, I don’t mind paying a price premium for a product if the quality is there.  If the coffee I bought at Starbucks tasted 10 times better than the pods I use with my Keurig machine then I’d be all for it.  But I actually think they taste about the same.

A few months ago, we got a Keurig machine as a gift and at first, I was a little skeptical.  But after using it for a few months, it is basically my new best friend.  We got the Keurig K60/K65 Single Serve Coffee Maker and it has worked really well so far.  We had a couple problems with clogging but once we started using filtered water, they all went away.

The machine is pretty simple to use and it has settings for brew temperature, size of the cup, etc.  One of the cool features that I like is that you can set it to turn off and on at certain times.  Since I only drink coffee in the morning, I set it to turn on at 7 am and turn off 2 hours afterwards.  That way, it’s already on and ready to brew when I go to work.  And on the weekends when I wake up around 8:30 am, it’s also on and ready to brew.  It only takes about 2-3 mins to warm up but still it’s nice to not have to wait.

The actual brew process only takes about 15-30 seconds depending on the size of the cup you want and you can even make hot or iced coffee.  For iced coffee, you fill up your cup with ice and set it to the 6 oz sizing.  Make sure you do it in a plastic cup or traveler mug since you don’t want the hot liquid and ice to mix in a glass cup.  After the brew process is done, I usually top off with a couple more pieces of ice, add a bit of creamer and you have an awesome ice coffee.

Keurig machines are so easy and simple to use because they use small plastic pods that make clean-up and brewing super easy.  All you have to do is put a new pod in, brew and then throw it in the trash.  No mess, no hassle, I like that.  I was a little weary of the pod pricing at first but I actually found some great pods on Amazon called San Francisco Bay Coffee.  They look a little different than normal pods but they work exactly the same and taste great.

Normal pods are enclosed in a plastic cup with an aluminum foil type cover but the San Francisco Bay pods have more of a filter type bottom and aluminum cover.  I actually prefer these because when you open up a new bag (they’re packaged in groups of 8) it actually smells like coffee.  If you buy an 80 pack on Amazon the pods end up only costing 36 cents each!

Here are some of my favorite flavors:

Readers, what do you think about the Keurig brewing system?  Have you ever tried making an iced coffee or heard of San Francisco Bay Coffee Pods?