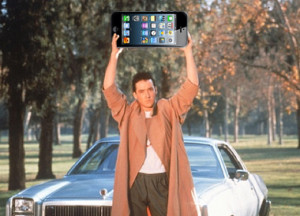 Ever since I graduated college, the one thing I’ve resisted doing on my own is signing up for my own cell phone plan.  I’ve been on my mom’s family plan since freshman year of college and I intend to keep it that way.  AT&T’s family plan lets you to add a line for $20 and get unlimited data for $30.  So back in the day, before I switched to a Galaxy S3, my iPhone plan was only $50 a month.  That’s probably a shock to anyone that pays their cell phone bill on their own but I don’t know if I could justify having a smartphone otherwise.

Now that the big three carriers are limiting data, plans are getting even more expensive(I will do everything I can to keep my unlimited plan and you should too!).  For unlimited talk and text and just 1GB of data, AT&T is currently charging $40 and $45 respectively.  $85 plus taxes seems like a ridiculous amount to pay per month and if I had to pay that I think I’d probably cut my smartphone like my friend Cat did here.  That’s why I really like this new cell phone deal that Walmart is offering.

Can You Do The Math?

The only reason that I fear this deal may not catch on is that most Americans can’t do the math.  There are countless studies that say how little Americans are saving for retirement each year but maybe it will be different when it comes to technology?  So here’s the deal, Walmart is currently offering the iPhone 5 at it’s wholesale price of $650, but it comes with the option to sign up for an unlimited data plan through Straight Talk Wireless for $45/month.  Here’s the not so complicated math:

(Wow, when you put it in these terms I can’t believe so many people spend so much on a cell phone but on to the analysis!)

The Walmart/Straight Talk plan saves you $500 over the course of two years and you get unlimited data vs only 1 GB with AT&T.  I primarily use my phone for data so this plan would suit me well if I wasn’t already on a family plan.  And as an AT&T user I can tell you that their cell service is horrible, I always drop calls(whether it was my iphone or my new S3) so I would guess that Straight Talk is at least comparable if not better in the voice department.

I can’t really speak to the quality of the Straight Talk network but I know that their phone service can’t be worse than AT&T.  Based on online reviews, it seems like their data service is slightly inferior to the big carriers but that’s expected if you’re saving $500 or more.  If I wasn’t on a family plan, I would definitely consider this phone since $500 is a ton of money to save over just two years.  And since $85 is the minimum you’d pay with AT&T, be sure to take a look at what you pay and compare that number to what it would cost to go with Walmart/Straight Talk.

The math is one thing, but do you think you’d be able to get over the psychology of having to pay so much up front to save money over the course of two years?  Anyone reading this blog would probably at least consider this offer and do the research into Straight Talk to see if the savings are worth it but I’m not convinced this type of plan will become popular.  Walmart is one of the first companies to offer a top of the line phone with a prepaid plan and for the consumer’s sake, I hope it catches on.

Readers, does this sound like a good deal to you?  Is it something you would consider or do you think the Straight Talk network isn’t worth the $500+ savings?  Btw, there are NO affiliate links in this post, so feel free to click away and explore the articles I linked to.