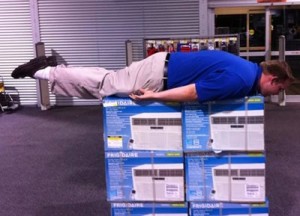 I’ve talked before about my loathe and disdain for certain companies but it seems like Best Buy tends to bring out the vitriol and hate from others too.  After reading my friend Holly’s article on how ‘Best Buy Sucks’ I figured it was a good time to pile on.

Even though I often see a lot of negativity towards Best Buy, they are still in business and somehow opening more stores than they’re closing.  When was the last time you saw one of their stores go out of business(a la Circuit City)?  I have even noticed a trend of lower prices at Best Buy over the past year or so that seem to coincide with when online retailers had to start charging sales tax.

I used to be able to find lower prices online for almost all electronics but Best Buy has come out on top for the last two or three products I had to buy.  Pair their lower prices with the Best Buy gift cards I’m always getting at 10% off(Amex just had another sync promotion for $25 off a $250 BB purchase and I have 4 Amex cards) and Best Buy’s prices become even more attractive.

Over the summer they also had a bunch of cool Facebook promotions where you would do daily polls and each one would earn you 25-50 reward zone points.  At the end of the summer, I had amassed 2,500 points or $100.  The best part about reward zone dollars is that they also count for tax.  So if I paid for a $110 item with $100 in reward zone certificates and $10 in cash, I would only pay tax on the $10 portion.

Since my fiancee just started med school, we figured it was about time to upgrade her 8 year old Macbook.  She decided on a Mac laptop again and after shopping around a bit, we found that Best Buy had the best prices on new Macbook Airs.  Somehow their price was actually $50 lower than the Apple store(even with the student/teacher discount).  The final price was $1,050 for the laptop plus tax.  I ended up using a combination of 10% off gift cards($550), reward zone credit($100) and paid for the rest in cash(I used my synced Amex to get $25 off).  And I also used a cash back site called uPromise to get 5% cash back on my online purchase.

I was feeling pretty good about my purchase until about a month later when I saw the price had dropped by $50.  Not only that though, I had also somehow missed a coupon for students that would give you an additional $100 off macbook airs.  All you needed was a .edu e-mail address.

All My CS Tricks

At this point, it was about 20 days after I made the first purchase.  Best Buy’s price match/return policy is only 15 days but since I’m a Reward Zone Silver Member, I get a 60 day return policy.  The stupid thing is though, they won’t match a price after 15 days.  So even though I could now go out and buy a new laptop and return the first one(there is no restocking fee on electronics at Best Buy) in order to create my own price match, Best Buy wouldn’t do it for me.

I didn’t want to go through the hassle of transferring all the data to the new computer so I decided to use all my Jedi Mind Tricks to try and get them to price match the new lower price.  I started off with their online chat feature, but they were absolutely no help.  I then turned to Twitter and they were surprisingly just as bad, they told me there was nothing they could do for me.  So much for my theory of putting the best and brightest CS reps on social media.

Finally, I called their customer service line and got through to a pretty helpful agent.  I don’t think she quite understood my predicament but she at least tried to get her supervisor to price match.  She ended up offering me a $25 gift card since they wouldn’t be able to price match and so that I wouldn’t have to return the first computer and transfer over all my data.  I took the gift card but there was no way I was going to let that $150 go unclaimed.

My Cunning Comes in Handy

I’d pretty much had it with Best Buy CS at this point so I decided to take matters into my own hands.  I bought a second Macbook air for $900 and returned it in place of the first one which cost $1050.  I was a little worried that when they scanned the barcode they would realize that it wasn’t the same serial number but apparently their systems are not sophisticated enough to detect this.  IT WORKED!  I successfully returned the second computer as the first one and got a refund of $1050 while only paying $900 for the second computer.

The funniest part about the whole situation was when I bought the second computer Best Buy actually screwed up my order again!  Since I’m a Rewards Zone Silver Member I’m supposed to get free express shipping.  At the checkout page, the shipping price was $0(I even took a screenshot) but after I submitted my order, the e-mail confirmation charged me $20.  I had to call a special hotline and waste 15 minutes on the phone while they tried to figure out how to refund my shipping fees.

Will I Still Shop at Best Buy?

There are only a couple companies that I show true loyalty to(Amex and Amazon) and all the others I could really care less about.  That being said though, it’s in my blood to find the lowest price and if Best Buy has the lowest prices I’ll probably shop there again.  I know these experiences that I’ve shared might turn some people off of Best Buy but I do think they have good people working there, they just have some of the most antiquated policies in the business.  There’s not a whole lot their CS reps can do since their policies are so stupid sometimes.  Poor policies means poor management and when you have poor management ultimately your company will fail.  My advice: short Best Buy’s stock 🙂

Readers, have you had any experiences like this at Best Buy?  Would you have gone through all the trouble that I went through to save $150?  Remember I’m unemployed right now so I need every penny!