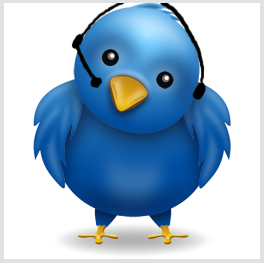 Most kids dream about becoming a firefighter or an astronaut or maybe even a customer service representative when they’re young. Oh wait, that last one might be more of a nightmare. Let’s face it: a job as a CS rep isn’t exactly a high paying one and most of the reps I’ve talked to haven’t been the brightest or even the nicest. You would think that stupid people would at least try and get by by being really nice, but maybe stupid people don’t know they’re stupid.

I’ll be honest, I call and e-mail customer service a lot. I don’t like paying fees and I don’t mind threatening to cancel accounts in order to get what I want. I’m kind of a baby like that, but I’ve been doing this for a while. I know exactly how to get transferred to the retention department or what to say to get fees reduced or new offers matched. I know that companies like Chase will retro-actively match credit card offers if a new one comes out and I know that other companies like United or Delta could give a crap if they screwed over your flight.

I treat every encounter with a CS rep like a chess match. Since I have a lot of experience, I usually end up winning but sometimes it isn’t easy. Even my favorite company(CS-wise), Amex, has been a pain to deal with once or twice. But, in the past few months, I’ve been noticing an industry-wide trend: companies are starting to bring back great customer service on social media.

I’ve made contact with several different companies via Twitter over the past few months and they were able to solve my problem in nearly every instance. I was shocked! Here’s the thing about social media: companies know that their online presence is affecting their business more and more these days. One bad publicity stunt can go viral quickly and turn thousands of people against a company in a heartbeat. Most big companies are starting to put some of their best and brightest on their social media task forces in order to avoid this.

Sometimes you don’t even have to tweet at the company, all you have to do is mention a company’s name and they’ll find you…creepy. Anyways, here are a couple experiences I’ve had lately via Twitter:

In this case, I signed up for a Citi checking account in order to get the 20k bonus points and I met all the requirements but still hadn’t received the points. I figured there was some type of waiting period but I just wanted to check. At first, I e-mailed their customer service address and the response I got was pretty funny. They told me that the promotion code I entered was not in their system even though I had a screenshot of the code saved on my hard drive. Nice try…

Anyways, I went to Twitter to vent my frustration(as seen below) and they actually called me that same day, found my account, and told me that I was on track to receive the 20k points by the end of August. The best part about speaking to their CS rep was that he actually seemed knowledgeable and basically told me that their other CS reps are idiots(I already knew that though).

The one time I had a bad experience with Amex was when they offered me 5,000 points to sign up for an extended payment option on my Business Gold Card. The terms clearly stated that all I had to do was sign-up but when I called the CS rep a couple weeks after signing up, she told me I had to make a $100 purchase. I tweeted Amex and they looked into the situation for me and told me that if I didn’t receive the points 2 months after signing up, to tweet them back and I would be credited. Two months went by, and I never received the points so I tweeted them and that same afternoon, they granted me 5,000 points! 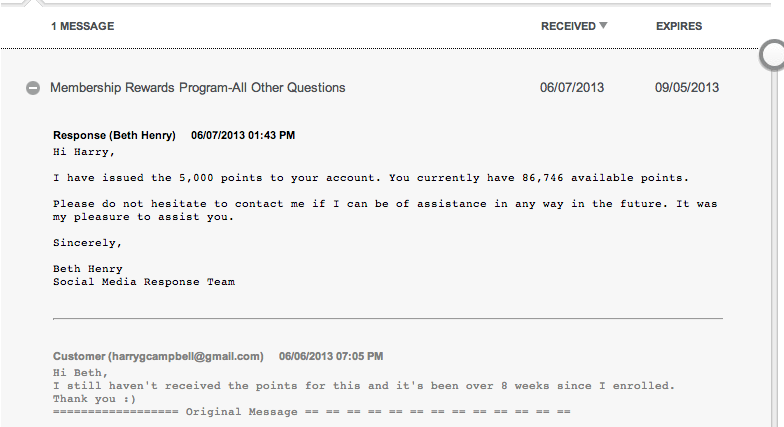 So not every experience I’ve had Tweeting customer service went well but most of them have been surprising to say the least. I’ve gotten points credited, fees waived, rooms for free and more. I’ve gotten into the habit of instantly tweeting my negative experiences about companies and seeing if they’ll respond. So if you follow me on Twitter, that’s what all those annoying and complaining tweets are about.

Readers, have you ever turned to social media to vent your complaints? Have you noticed the overwhelming trend of better customer service via social media over more traditional methods?