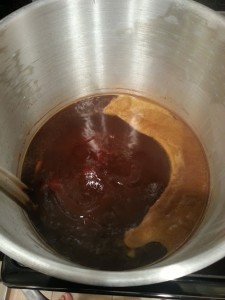 My First HomeBrew Boiling Away

I’m not sure how many of you have picked up on it, but I like to drink(alcohol, that is).  I don’t spend my weekends binge drinking, but I love to enjoy a glass of wine while I’m cooking or a nice cold beer after a long day of exercising.  I’m probably the furthest thing from a beer snob though, since I’ll drink everything from Natty Light to Corona.  But if I had my choice, I’d probably go with a nice microbrew like Fat Tire or Sierra Nevada.

I was lucky to live in San Diego for 10 years since it’s probably one of the top cities for microbrews.  I think only Portland, Oregon compares when it comes to quantity and especially quality.  There are some amazing breweries in the San Diego area and some of my favorites include Ballast Point, Mission Brewery and of course Stone Brewery.  My house was about 5 minutes away from Ballast Point so I was always filling up growlers there.

The great thing about a Bud Light is it costs around 75 cents a can.  Once you step up to the big leagues though and start drinking microbrews, you start paying anywhere from $1.25(if you’re really lucky) to nearly $2 per beer.  I like beer and all but paying $2 per beer is just way too much for me.  And one thing I’ve noticed is that the retail(supermarket) price of beer is very close to the business price.  I can usually go out and get a pint of microbrew for $4-$5 at a bar but that same exact beer will still cost around $2 at the grocery store, not much of a difference.  Compare that with beverages like sodas, which you can buy for 25 cents a can on sale and usually cost nearly 10x that at restaurants.  That makes buying beer at the grocery store kind of seem like a rip-off.

I didn’t start brewing my own beer to save money though.  I saw a LivingSocial deal for a beer-making starter kit from Midwest Home-brewing Supplies and I thought it would make for a fun hobby.  The living social deal was $64($126 value) plus $12 for shipping and included the Brewing Basics Equipment Kit for, a 5 gallon recipe kit and a $25 voucher for a future purchase.  That deal is expired as of today but you can still get the Brewing Basics Equipment Kit for $69.99 plus shipping.  A 5 gallon recipe kit is only $26.99 more.  Here’s everything that’s included in the starter kit:

The only other thing you’ll need in addition to this kit to brew your first batch is a brewing pot.  The one thing I learned from all my brewing research is that you want to avoid boilovers at all costs during the brewing process.  Most people do a 2 or 3 gallon boil so I would highly recommend getting a much larger pot.  That way, you can pretty much just let it boil for an hour and not have to hover over it the whole time.  I ended up buying a nice 32 qt(8 gallon) aluminum pot that has worked out perfectly.  It’s pretty big so I never have to worry about boilovers and at the time it was only $30 plus free prime shipping on Amazon.

I also bought an auto-siphon for $10 to make the process of transferring the beer from the fermentation bucket to the bottling bucket a little smoother.  This product is optional but I think it makes things a lot easier.

Cost of the Kits 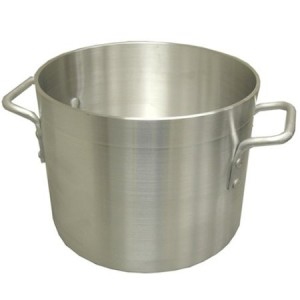 Most of the kits I buy on Midwest Supplies are priced in-between $20 and $30.  You can spend a lot more but I’ve found that you really don’t need to in order to get the high quality taste you want.  I usually spend around $30 per kit including shipping and it makes around 45-55 beers.  If we conservatively assume an output of only 45 beers, that’s only 67 cents per beer.  My only recurring costs are bottle caps, which are very inexpensive at around 3 cents each bringing my total cost per beer to 70 cents.

The nice thing about the starter kit that I bought is it includes everything you need.  There’s a whole bunch of other crap you can buy like carboys and wort chillers, but if you just like drinking your own beer like I do and giving it away, this kit is perfect.  The only problem I’ve had is collecting beer bottles.  I can’t seem to drink them fast enough and every time I need to bottle I have to go scrounging around for beer bottles.  This might not be a problem for some of you 🙂

So far I’ve made three different batches and they’ve all turned out great.  It’s kind of a long process since you have to let them ferment for a few weeks and then leave them in the bottles for another few weeks but once you get going, it’s pretty addicting.  Brewing isn’t too time intensive either since the brewing portion only takes about 2 hours and the bottling portion takes just over an hour.

I actually like brewing my own beer and find it to be a fun and rewarding hobby.  The fact that it also saves me money is just an added bonus.  I also think it’s a lot cooler showing up to a party with a six pack of homebrew as opposed to something you bought at the store.