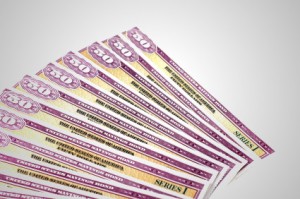 Believe it or not, the money in your savings and checking accounts is actually losing money.  It doesn’t even matter what bank you have.  Whether you bank online, or brick and mortar; they’re all losing money due to inflation.  Inflation usually won’t appear all of a sudden, but it can systematically eat away at your returns over time.

I’ve seen inflation first hand and I’m sure you have too.  When I was in high school, I would always buy a 20 oz. Powerade or a 20 oz. Sprite at the vending machines for just one dollar.  I can guarantee you won’t find any 20 oz. soft drinks for a buck anymore, instead, now they’re around $1.50.  So a fifty cent increase over 12 years works out to about 4.17% inflation on the cost of a soda!  Now inflation is somewhere closer to 3% per year but you get the point.

Series I bonds were introduced to combat this very phenomenon.  They are actually government savings bonds issued by the US Treasury that offer inflation protection.  Each I bond pays interest based on two components: a fixed rate and an inflation rate.  These two rates make up what’s known as the composite rate(total yield).

The fixed rate is fixed for the life of the given bond and this rate is announced on May 1 and November 1 of each year.  The inflation rate is based on the Consumer Price Index, or CPI.  This rate is also announced every 6 months on May 1 and November 1 and is based on the change in the CPI-U from the previous 6 months.  This inflation adjustment applies to existing I bonds and newly issued ones.

I bonds aren’t doing too hot right now, but new rates will be announced on November 1st.  I’m very curious to see what the rates will be like since there’s been a lot of speculation about a downward trend in the CPI.  The current I bond rate is at 2.2% through October 31, 2012.  The fixed portion is actually paying 0% right now, but the inflation rate is at 2.2%.  Treasury direct provides rates as semi-annual rates so you need to multiply their rate by two to get the yearly rate.

Can You Ever Lose Money With I Bonds?

The best feature about I bonds is the inflation protection that they provide.  In addition, they are one of the only investments in the world that is fully guaranteed by the United States government.  I Bonds can never return less than 0% so in times of severe deflation you’d actually be making money.  And if inflation picks up, you would earn more interest through the increased inflation rate.

In any single calendar year, one person may purchase up to $10,000 in I bonds through Treasury Direct’s website, but you may purchase an additional $5,000 using your tax refund.  So a single person could get a maximum of $15,000 while a married couple could get $25,000(filing jointly).

Series I bonds are meant to be long term investments so one of the drawbacks is the holding period.  Unlike TIPS or other government issued bonds, I bonds cannot be resold on the open market.  You must hold onto an I bond for one year, but after that, there is only a 3 month interest penalty if you redeem your bond.  After 5 years, there is no penalty to redeem an I bond.

Interest from I bonds accumulates tax deferred for up to 30 years.  Unlike CD’s which distribute interest monthly(or annually), I bonds distribute interest when they mature or when they are redeemed.  I bonds are exempt from state and local taxes but you will have to pay taxes federally.  One caveat though, if you use the entire proceeds of the I bond(principal and interest) to pay for qualifying educational expenses, the interest can be tax free at the federal level(although there is an AGI phase-out).

Who Should Buy I Bonds?

I Bonds probably don’t make sense for wealthy individuals or big time investors because of the low purchase limits.  But for the rest of us, they are a unique risk-free savings tool.  I currently don’t own any I bonds, but I’ll definitely be taking a look at them once the new rates are announced on November 1st.

10 years ago, I bonds were paying over 6% on the fixed portion alone!  There are probably even still a few people around who locked in that rate and have another 20 years or so of risk free return at 6%.  Although I bonds make more sense in a high interest rate environment, where you can lock in the high rate, there is still some value to holding them now.  2.2% isn’t a ton but it’s more than almost all other banks.

Readers, have you thought about investing in I bonds or do you already own them?  If the rate goes down, I don’t see any point in buying them as my 5 year CD’s at Ally are all around 1.75%.