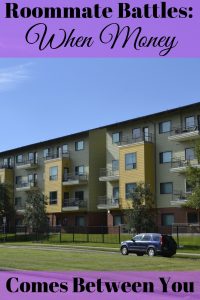 I remember when I first went away from home to college all the way across the state. I was married, so my “roommate” was actually my husband. We shared everything, including the money in our joint checking and savings accounts.

Of course, my situation was a little different from that of many other college students. When they move away from college they may end up with complete strangers for roommates.

At first they probably remain cordial and polite with one another. But what happens when the newness has worn off and roommates clash? If you have a roommate, what will you do when money comes between you?

Start Off With a Plan

One thing you can do to prevent roommate battles is to start off with a plan early on. Obviously it’s even better if you can pick your rental together. Nevertheless, that isn’t always possible. Therefore, an alternative is to sit down with your roommate, or roommates, soon after moving in to discuss money issues.

You can make division of the rent simple or complicated depending on how nitpicky you want to be. For instance, if you want, you could figure the square feet of each person’s space. Then, divide by the total square footage to get a percentage. That percentage can then be used to figure their portion of the monthly rent payment.

But you can also make the decision a whole lot easier by dividing the rent payment evenly among everyone. If space is pretty much equal it might make the most sense.

Generally it’s easier to divide these bills by the number of people living in the house or apartment. But what if one person wants cable TV and the other doesn’t?

In that case, the person wanting it should have to pay the whole bill, choose an alternative, or do without. Whichever way you choose to handle it, everyone should agree ahead of time to thwart roommate battles.

Food is another area of discussion in order to avert roommate battles so money doesn’t come between you. Decide right away if you’ll shop together and split food costs or pay for your own and label it.

Try not to eat out too often so you have enough money to pay your own bills. Restaurant food is expensive and avoiding it saves money.

Believe it or not, sometimes roommate battles happen over silly things like who was hogging the TV. Although that may not seem money related, it could go that direction. When one person watches more than their fair share, they may be asked to pay more of the cable bill.

The best way to avoid this kind of money issue is to set up rules ahead of time. Choose certain nights when each person can watch what they want. Or, allow a certain number of hours per person each week.

Even curfews can turn into money fights if one roommate disrespects others in the matter. Listening to loud music, playing video games, or watching TV can disrupt sleep and study time of others. They may retaliate by demanding respect, since they pay rent too, and thus the fight begins.

Avoid these issues by talking about them ahead of time. Agree on a plan and don’t be so rigid you can’t allow a bit of wiggle room for special times.

Something else you can do to prevent clashing with your roommate is to document everything you talked about. Have a computer or pen and paper with you when you talk so you can take notes.

You could even go so far as to print it out and have each person read and sign it. Then make copies for everyone. That way if either you or a roommate needs to look back at what was decided on there is no question.

One of the tough things to hash out when money comes between you and a roommate is consequences. Although if either of you is angry it might not be quite so tough to discuss.

Still, to avoid heated roommate battles, include consequences of rule violations. Decide ahead of time what everyone will do if one person moves out.

An additional thing to talk about ahead of time is how you’ll deal with someone who is behind on their share of the rent, utilities, or other bills. Certainly you don’t want to pay their bills for them because you may never see that money again.

At the same time, drawing a hard line in the sand could make it difficult for everyone. As an example, if a four way split turns into a three way split, everyone’s bills go up.

Once roommates get used to each other the rose colored glasses usually come off. That’s when money could come between you. But roommate battles aren’t inevitable. If you use these tips you may avoid them, get along well, and even stay friends for a lifetime.

Have you and a roommate ever had money come between you? If so, how did you handle it?