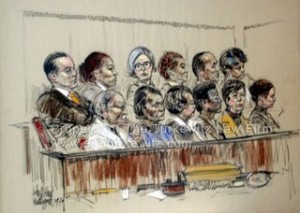 About a year ago, I called into the Superior Court’s office and asked, “How do I get selected for jury duty?”  The woman on the other end was a little taken aback, apparently not many people want to serve on a jury, but she told me that they pull from DMV and voting records so make sure I was registered there.  I had recently changed my DMV address to San Diego county so I was all set on that front and after filling out a quick online form, my voting address was changed to San Diego County.

I guess the government can be expedient when they need something from you since it didn’t take long after that.  I was called in to jury service less than a year later and I couldn’t have been happier.

I’m not sure that every region is the same, but San Diego Superior Court offered me the ability to report up to two weeks before or after my date.  Now that’s some flexibility for you!  I didn’t end up using this feature but I could see how it would be very handy if something came up at the last minute or you had a light day of work planned.

I did end up postponing my date a couple months though to a more convenient time(twice actually) and the process was very simple.  I went online and they gave me the next available date, I said OK and received a new badge in the mail a week later.  So far so good!

The Day Had Finally Arrived

One problem with serving on jury duty downtown is parking.  I’ve never even tried to park downtown during a weekday since the prices are astronomical.  The parking lot behind the courthouse was $25 a day for parking.  There is plenty of metered parking around the area, but the meters are only good for a couple hours.

I decided to use my Car2go membership to get downtown and I quickly found a metered space(Car sharing services can park in meters for free!).  Total trip cost was $8 one way, a lot cheaper than parking in the lot and a lot quicker than taking public transportation, or so I thought.

I arrived to jury duty a few minutes late just after 8 am and didn’t get into any trouble(score!).  They showed a quick video about jury service and then started calling off names.  It took me a while to figure out whether I wanted my name called or not, but eventually I decided it would be best if the speaker never uttered my name.

After the initial round of name-calling, I went into a quiet room in the back and started working on my blog.  I wrote one article and brokered two advertising deals for $300!  Just as I was finishing up, a voice came on over the loudspeaker telling us it was time for a break.  Sweet, union mandated break!

After an hour or so of working on my blog I decided to switch gears to my , fourth job.  Did you guys know that I’m a freelance writer for various financial sites?  Anyways, I started writing a few months ago and since I have limited time, I am very picky as to which jobs I accept(translation: I only take high paying gigs).

Anyways, I worked on a long article about foreclosure mobile homes and turned the article in for a cool $100.  My name still hadn’t been called.  By this point it was looking like we might get to go home early.  Just then, a mysterious voice came on and let us know that it was time for a 1 hour and 45 minute lunch break!

My work has pretty flexible hours but I don’t think I’ve ever taken a 1 hour 45 minute lunch break!  So far, I’d say jury duty was way better than my day job and I hadn’t even hit my ideal 4 hour work day.

An hour and forty-five minutes is a long time and I knew I’d only need about 20-30 minutes for lunch so now I had to find a way to kill an hour.  I picked the downtown court location in part since there are tons of restaurants, shops and the bay is right there if you want to take a nice walk. 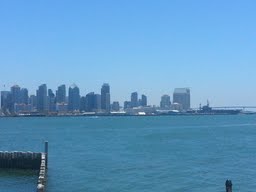 My options were pretty abundant but when I walked out I saw a Chase bank and remembered that I had seen an offer the week before for a free $200 for opening a new checking account.  You all know how I love free money so I decided to stop in and hit them up for a free $200.  I was immediately greeted by a nice guy named John who helped me set up my new checking account.

All I had to do was deposit $100 and keep a minimum balance to avoid fees.  Sure enough, three days later, a $200 bonus arrived in my account.  The whole process took about an hour but it still left me with enough time to grab a panini and make it back by 1:15 on the dot.

We’re all back from lunch now, but things are still getting settled and I probably could have made it a 2 hour lunch without anyone noticing.  The room has thinned out quite a bit, but there is still a significant amount of people waiting for their name to be called.

My post lunch food coma is hitting at the perfect time since my computer is nearly out of batteries and I’m tired of working so hard.  I browse the internet for a while, catch up on ESPN, Slickdeals, Facebook, etc and before I know it an hour has gone by.

People are starting to get antsy, a woman next to me tells me how she can’t wait to get back to work.  Huh?  We’re supposed to go back to work?  Isn’t the point of getting let go early from jury duty so you can go home?

A final flurry of names are read off and we are told to wait in case they needed more jurors.  Sounds suspicious, but 20 minutes later, a magical voice comes on over the loudspeaker and tells us that we are free to go home.  They thanked us for completing jury service and they will see us again next year!

WAHOO!  Ok I didn’t actually scream, but I did smirk and walk out.  I received a free day pass from MTS San Diego so I decided to take the trolly home.  30 minutes later I was walking into my condo and my day was done!

My employer paid me for the entire day and most of the people I talked to said the same.  I don’t think my outlook on jury duty would be so sunny though if I had to do it on an off day or if I wasn’t paid for it.  But either way, it’s pretty easy to get out of jury duty if you really want to.  Personally though, I’m not too busy to take a one day vacation and I definitely made the most of my time.  Got paid by my employer, worked on my blog, wrote a couple articles for my freelancing gig and stopped by Chase to get a free $200 checking bonus.  Not bad for a paid vacation if you ask me.

Readers, was my jury duty experience pretty uncommon or do you think it’s typical?  Do you have any similar stories or maybe horror stories from jury duty?