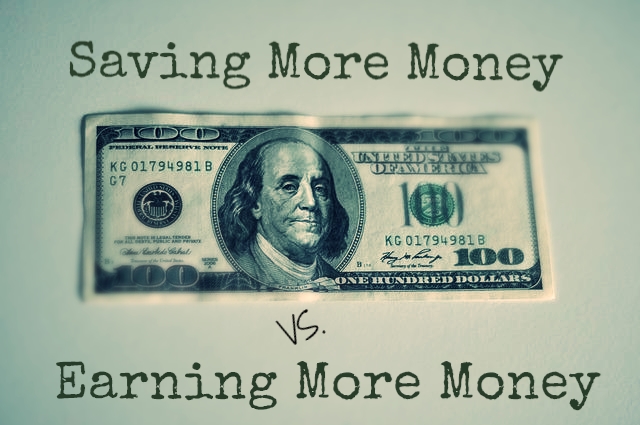 When it comes to building real wealth and dramatically improving your net worth, investing is usually the way to go. And the best way to successfully invest is to start early. This way, you allow your money to compound over time – and compound interest is a far more powerful factor than even throwing tons of money at your investments late in the game.

But when you’re just starting out, coming up with a sum of money every month for the sole purpose of contributing it to your investments in order to grow your wealth isn’t easy. You may head into to the personal finance blogosphere in hopes of figuring out how to come up with more money to invest. If you do, you’re likely to be bombarded by two schools of thought that approach this problem from opposite angles.

Save Money or Make Money? The Frugal Argument

Those that would argue that saving money is the way to go are generally frugal people who live well on less with ease. They don’t want for much and are able to save big chunks of even smaller or just average incomes.

Savers will analyze the little things, and be the ones to tell you your daily latte habit is costing you over a thousand bucks per year. They know that cutting cable can save families $500 to $1,5000 annually. They’ve added up how much you could save if you rode your bike instead of drove your car, raked leaves instead of pulling out the leaf blower to do it for you, and tackled DIY fixes and maintenance around the house.

Mr. Money Mustache would be a great “save money” representative. He argues that you really don’t need much at all to not only get by, but to be happy doing it. The “Mustachian” view is one that encourages minimalism and DIY for just about everything, and completely shuns materialism and excess. For most average people who live in a nation of abundance, like the United States, you can live well on something between $20,000 and $40,000 per year – and sock all the rest of your income away into investments.

What the Savers Have Right: The savers have this whole mass-consumer thing figured out – and beat. Material goods will only serve to drag you down and cause you to be stressed and unhappy. We don’t need all the things marketers and advertisers want us to think we need, and a minimalistic approach to life is a really liberating one. Savers advocate for doing something better with your money than blowing it on frivolous spending, and that’s an argument anyone who is interested in building wealth should get behind. Not to mention, the savers’ approach will lead to being less wasteful, more resourceful, and expressing gratitude for all you do have – rather than allowing your focus to linger on what you don’t.

Where the Savers Fall Short: The problem that you will inevitably run into is that you can only cut so much from your budget. You can only eliminate so many expenses before you start depriving yourself of a decent, comfortable life.. and those of us who are starting out with smaller incomes don’t have far to go before we’ve reached out expense-cutting-threshold. While Mr. Money Mustache has some awesome ideas, he and his wife made six figures annually while they were working. When you are makin’ bank, it’s definitely easy to save more. When you’re starting out with hardly enough to cover the bills, this argument starts coming up short.

Save Money or Make Money? The Mogul Argument

Coming at the money problem from the opposite end are the people who believe the easiest way to get more money is to make it yourself. They say you can get out there and earn what you need.

These are the entrepreneurs, the career-driven individuals, and the ones who dream about business empires. That daily latte? Don’t worry about it, champ, as long as it will power you toward your next big idea, help you land your next high-paying client, or get you through a long night of finishing up your latest product that will launch then next day. Earners argue that, essentially, there are bigger fish to fry and no one has time to stress over a $4 coffee drink when you’re busy raking in profits.

Ramit Sethi has turned this way of thinking into an incredibly profitable business (imagine that!) and a successful blog and book called I Will Teach You to Be Rich. His no-nonsense, no-apologies approach is all about increasing your income as the real way to serious wealth.

Ramit’s argument is compelling, too. He’s been ridiculously successful – and he’s worked hard to make that happen. He’s a smart guy who has valuable insights to share via his posts as well as his courses. Plain and simple, he believes in making money. And he believes you should be making more money, too.

What the Earners Have Right: The fact that you can make more money is absolutely true, and earners have been eagerly spreading the news. There has never been a better time than now than to make what you want out of your career. It’s easier than ever to become an entrepreneur in the digital economy and launch an online business that allows for more freedom – and more earnings – than the traditional business model you may be stuck in now. Plus, earning more is going to make it a cinch to invest more. It’s pretty hard to say, “you know, I don’t think it’s worth earning more money to reach my financial goals faster.” That just doesn’t make sense!

Where the Earners Fall Short: Sometimes to make more money, you have to work. Hard. And you have to take big risks if you want big rewards. This simply isn’t feasible all the time for every single person. It certainly is easier to start with saving more over making more.

Not to mention, big-time earners can be wasteful. They can blow money and make stupid spending decisions simply because they have the money to do so with. Earning money is great – but it comes with some caveats. Making a ton of extra money will be for naught if you’re not disciplined enough to invest the majority of it.

Which Side is Ultimately Correct?

Because personal finance is personal, there is no one right answer. What may get us closest to a straightforward conclusion, however, is to seek a balance.

There is nothing wrong with saving money. After all, most of us truly do make enough to live very comfortably without spending every last penny of our monthly incomes – and we could stand to be a little less wasteful and a little more resourceful. But there are serious limits to this, and if you stick to only trying to save money you may be at it for a really long time.

Earning more money, on the other hand, is going to accelerate your wealth building. Earning more is going to get you on the fast-track to reaching your financial goals. It’s also going to provide more security should something go wrong (as long as you don’t give into too much lifestyle inflation).

Aiming to do a little of both seems like the most sound, sensible strategy – but there are strong proponents of doing it one way or another in both camps. What do you feel is the best way to increase the money you have available to invest in order to build your wealth? Do you prefer saving or earning more?