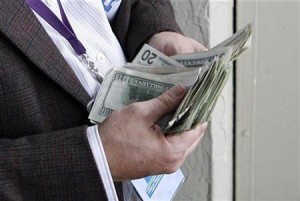 Most articles around this time of year talk about what to do or not do with your tax refund.  I’ve already talked about that, so instead I’m going to help you come up with ways to avoid paying taxes next year.  I don’t mean stashing all your money in offshore savings account but we can probably all agree that paying taxes sucks!  What makes matters worse is how inefficiently the government spends your money.  I’m all for re-distribution of wealth to the people who need it but we know that doesn’t happen very often.  I’d rather donate my time and money directly to the organizations that need it and pay less in taxes than get gouged by the US government.

Taxes are a necessary evil in any civilized nation, we need roads to drive on, we need schools to educate our kids and so on.  But it’s not all bad with taxes, the government does provide some options in order to help every day taxpayers like you and I to save money on taxes.

These are the deductions that the average taxpayer usually takes advantage of.  They may include:

Last year during the presidential election, there was a popular anti-Romney sentiment that blasted him for paying a lower percentage than the average taxpayer.  But that’s because Romney earned most of his income from capital gains,which is taxed at a much more favorable rate than regular earned income based on a tax calculator.  But most every day people won’t be able to really take advantage of this since they get paid W2 salary.  Even though executive-types are the last ones who need it, they are generally the ones that tend to get compensated in company stock.

If you’ve ever gotten paid in cash you know how sweet it is.  Legally, you are required to report this income to the IRS but I don’t think many people do.  If you’re looking for a source of second income, cash jobs can be a huge boost to your total income.  Since your primary job will most likely be W2 income, every additional dollar you make at a second job will be taxed at your marginal(highest) rate.  Here’s an example:

Joe the plumber makes $50,000 a year in W2 income.  He takes on a second job with Home Depot to make a little extra cash and gets paid $10,000 in W2 income over the course of the year.  That’s great for Joe but that $10,000 in Home Depot income is being conservatively(would be more with state, fica, medicare) taxed at 25%(federally, assume no deductions).

So he really only made $7,500 extra after taxes.  Instead, Joe decides to tutor up and coming plumbers willing to pay him in cash.  Now once he makes $7,500(or maybe even less) from tutoring he’s at the break even point with the Home Depot job.

There are quite a few options when it comes to finding cash jobs and some may take more work than others but once you build up a small clientele it will become easier and easier to make tax free income.  I’ve done everything from selling used textbooks for a profit to tutoring and coaching high school aged students.  Everything I did was fun, easy and I got paid in cash.  Here’s the list I came up with:

If you own your own house or condo, you can find a roommate and immediately start saving money.  Again, it’s up to you to report the rental income but you can come up with creative ways like having them pay for all the utilities, food and housing supplies so that you don’t have to pay taxes on that income.  I think the rules are a lot less strict when you’re living in the property and charging someone rent as opposed to renting the entire unit out to someone.

Did you know that I own my own business?  I work as an independent contractor for my volleyball club so the IRS considers me a business owner.  The income is minimal(less than 10k/year reported as 1099-Misc) but it allows me to take on many deductions that I would normally never be able to get.  I’m able to deduct my home office, the miles I drive to and from practice and tournaments, meals/entertainment, hotel stays, etc.  Each year, I’m able to nearly deduct my entire coaching stipend and pay almost nothing in taxes.  This makes a huge deal to me for the reasons outlined above in our ‘Joe the Plumber’ example.

I actually end up making about the same on a per hour basis at my coaching job as I do at my real job.  And the former is a lot more fun, I would actually barely call it a job.  On this one, you might be best served to talk to a friend who’s a CPA/tax professional because you might be able to find a ‘business’ you can open and start saving on taxes.

Readers, are you ok with paying these ridiculous tax rates or do you look for every avenue to try and legally slip past the IRS rules?  Do you think it’s ethical to skirt the IRS?  If your answer is no, what do you think about the marriage penalty, how is that fair?