Editor’s Note: I’m leaving for my trip to Kauai this Friday so I thought it would be the perfect time for this post. Aloha! And yes, that is our hotel in the picture below and that is a lazy river! 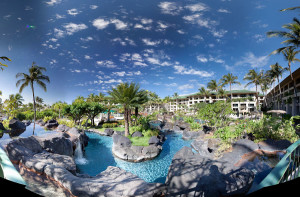 Some people probably think I’m crazy for holding 22 credit cards in my wallet but I have a good reason for doing so. Ok, I don’t really have them all in my wallet, I keep them in a little box in my drawer but you get the point. The reason that I love signing up for credit cards though is because of the amazing tax-free sign up bonuses.

Even though I’ve signed up for that many cards, I’m still at a 750+ credit score and I’ve never been denied for a card. So don’t believe it when you hear people say that signing up for credit cards is bad for you. These people don’t know what they’re talking about and as long as you keep things in moderation you’ll be just fine.

I’ve already talked about my first app-o-rama and recently I decided to put some of the points from that sign up spree to use. Even though I’m trying to save up as many points as possible for our honeymoon next summer(2014), when I saw this recent deal pop up I had to pull the trigger. At last count, I had over 600,000 points spread across Amex MR, Chase UR, Citi ThankYou, Barclays, Hyatt, American Airlines, United, US Airways and Delta so there are still plenty of points left for our honeymoon.

Since my fiancee is in med school now, it’s a lot tougher for us to travel using rewards points since she can only take time off during breaks from school(which usually coincide with peak travel times). Award booking can be very tough during these times but it is still doable if you plan far enough in advance. I did not do that for this trip though, instead, I got pretty lucky.

I was reading one of my favorite travel blogs(The Points Guy) when I saw a post about discounted American Airlines Award Seats to Hawaii. Sure enough, I checked and there were seats available in December from Southern California to Hawaii for only 15k points each way. There was actually a ton of availability leading up to Christmas but I had to check with my fiancee first.

Like I said, we got pretty lucky since she gets three weeks off for winter break and her break started a week before Christmas. So I was able to book us a flight out on Friday December 13th after her last test and back on Tuesday December 17th for a total of 5 days/4 nights in Kauai. It’s a nonstop flight from LAX to Kauai and it only cost 30,000 points each for a total of 60,000 points and only $10 in fees. If I would have paid for this flight in cash it would have cost $607: 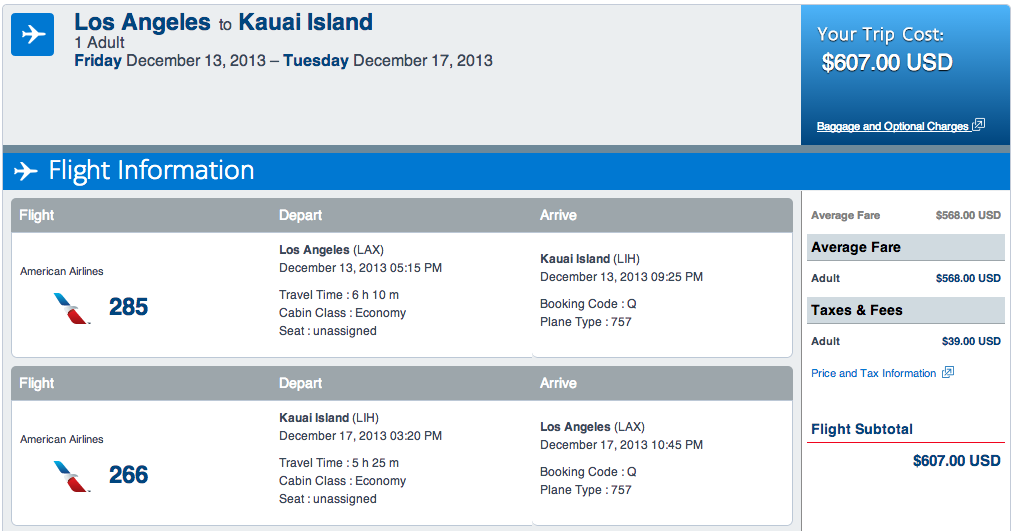 The total cost for both flights would have been $1,214 if we paid in cash but since we paid in points, it was only 60,000 points. That’s a pretty solid redemption rate of 2.02 cents per point. Usually you can redeem 1 cent per point for gift cards/cash back but if you redeem for travel, the ratio can be much higher, as is the case here.

Even though there’s a ton of stuff to do in Hawaii, there’s something about coming home to a nice room after a long day or waking up and having breakfast on the lanai overlooking the ocean that makes my wallet melt. Normally, I would never shell out the big bucks for a nice ocean view hotel room but on my last trip to Maui I did it and it was well worth it. I managed to find a great deal but it was still a $300+/night room.

On this trip though, I wanted to pay for the entire hotel stay with points so I knew an ocean view room would be tough to get. Usually, when you pay with points it’s tough to get anything other than standard rooms. I ended up deciding on the Grand Hyatt Kauai because it is a very highly reviewed hotel and I have a combination of Hyatt points, Diamond membership and free award nights with them. And they have a lazy river, that definitely sold me!

I really like the way Hyatt’s hotel points system is set up since you can redeem just 22,000 points for a room at any Hyatt worldwide. Some Hyatts in Europe go for up to $700-$800 a night during peak times(for just a standard room) so you can see how valuable Hyatt points can be. At the time of booking though, it was only $329 for a basic pool view room. Since I already had about 8,000 points in my Hyatt account I transferred over 58,000 points which would cover three of the four nights and for the fourth I decided to use a free award night I had from a recent sign up bonus.

About a month ago I signed up for the Chase Hyatt Visa which gave me two free award nights after spending $1,000 in 3 months. Since I was a Hyatt Diamond member at the time of sign-up, the award nights became suite nights so I got two free nights in a suite at any Hyatt property in the world. I would have used both nights at the Hyatt Grand Kauai but they only had a Garden Suite available on the third night so I booked it. So the first, second and fourth nights will be in a regular pool view room but I’m hoping that they’ll let us stay in the suite for the fourth night instead of making us move. This depends on availability but it’s been known to happen. At the time of booking, the garden suite was $881.

Normally, I book rental cars through Costco Travel but for this trip I wanted to try and use points for everything(except food and entertainment). I remembered hearing a tip that the Citi Thank You Network offers really good redemption rates on car rentals so I gave it a shot. Costco travel quoted me at $234 for a fullsize car for 5 days while Citi only charged me 14,430 points for the same fullsize car. Citi points are very tough to redeem for better than a 1:1 ratio so I jumped on this opportunity. I booked with Citi at a redemption rate of 1.62 cents per point(23,400 cents/14,430 points).

I’m pretty excited for this trip and knowing that it’s going to be free makes it even better. Plus, there’s nothing better than getting paid while you’re on vacation!

Readers, so what do you think about all the work I put into this? Was it worth it for a free trip?